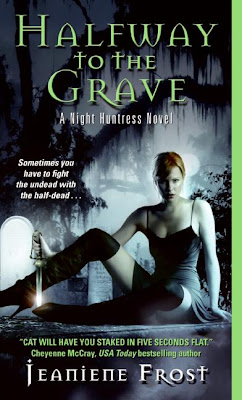 Flirting with the grave…

Half-vampire Catherine Crawfield is going after the undead with a vengeance, hoping that one of these deadbeats is her father–the one responsible for ruining her mother’s life. Then she’s captured by Bones, a vampire bounty hunter, and is forced into an unholy partnership.

In exchange for finding her father, Cat agrees to train with the sexy night stalker until her battle reflexes are as sharp as his fangs. She’s amazed she doesn’t end up as his dinner–are there actually good vampires? Pretty soon Bones will have her convinced that being half-dead doesn’t have to be all bad. But before she can enjoy her new found status as kick-ass demon hunter, Cat and Bones are pursued by a group of killers. Now Cat will have to choose a side . . . and Bones is turning out to be as tempting as any man with a heartbeat.

What was I thinking in taking so long to start this series?  Was I out of my mind?  Scoot over all previous fictional boyfriends, because you are being replaced at the moment with Bones!  Sexy body? Check. Sexy accent? Check. Humor? Check. First time in a while staying up late to read the sexy goodness called Bones? Check again.


I loved this story by author Jeaniene Frost!  We have half vampire/half human Cat Crawfield determined to take down every vampire she hunts.  She is strong, determined and ruthless to the point of staking the vampire first and not waiting to ask any question later.  After her mother was raped by a vampire resulting in her birth, Cat is determined to get revenge on the undead vampires for her mother.  While trying to seduce sexy Bones in the hopes of catching him off guard to stake him in the chest, she finds herself captured by him and discovering that he is a Master Vampire with more strengths than she thought.  One of my favorite lines is what Bones is taunting her with when she wakes up after Bones has struck her down.

“I thawt I thaw a putty tat.”
The mocking voice caused my pain to dissipate in a rush of terror.  When I saw the vampire close by, I shuddered.
“I did, I did thee a putty tat!”  PAGE 13

When they come to an agreement though, she finds herself being trained by Bones and learning more about him than she wants.  She learns he is stronger, smarter and even sexier than previous vampires she has met, but she also learns he is compassionate, protective and everything she wants in a relationship.  After struggling to come to terms with falling in love with a creature she hunts, she gives into the lust and falls head over heels for him.  Bones also feels the attraction and fights for Cat with such fierceness that Cat believes that vampires can love like humans.


With action, suspense and romance all around, this is a great series to pick up and sink your teeth into!  The pace was written perfectly and I was amazed at how much I enjoyed the characters.  The secondary characters were wonderful as well.  I loved Rodney the ghoul and couldn’t even bring myself to hate Tate at this point.  I enjoyed each scene that had Bones in it because not only is he the hero, but you actually forget he is a vampire at times!


The only problem I had with this book was the way it ended.  I understand that it is a series, but I actually wanted to throw my book across the room and I might have cursed a few times at Cat in the process. My book buddies had to hear me curse and complain at how stupid Cat was being, but they told me to hold on for great chapters to come.  I trusted them because they have never let me down and quickly bought the next book instead of giving up on it.


Overall, a great paranormal romance with some urban fantasy feel to it that kept me up late with intrigue and excitement.  If Cat keeps up what she did at the end of this book, Bones is welcome to come stay with me though!

Bones rose from his kneeling position and swung his gaze to me.
“Lucifer’s bouncing balls, Kitten, not again!”
Uh-oh.
–page 222

BONES: “Fine. I promise I won’t kill him”
He said it too easily. My eyes narrowed.
CAT: “Promise me right here and now that you will also never cripple, maim, dismember, blind, torture, bleed, or otherwise inflict any injury on Danny Milton.  Or otherwise stand by while someone else does as you watch.”
BONES: “Blimey, that’s not fair!” he protested.
–page 253