Thanks to Harlequin Ambassadors, I have 3 copies of CASE FILE: CANYON CREEK,WYOMING by author Paula Graves to giveaway to 3 lucky people! 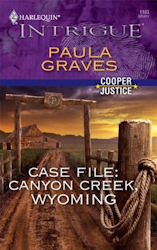 What was supposed to be a quiet vacation in scenic Wyoming turned deadly when Hannah Cooper became the target of a serial killer. Although she survived the attack, the ordeal was far from over. But she wasn’t alone. Not when Riley Patterson appointed himself her protector.

Beneath Riley’s strapping, solemn exterior hid a hard-driving sheriff who would stop at nothing to catch a killer. He promised Hannah safety, but it was the danger he posed that drew her in. Riley was as much a mystery as the man who sought to take her life. Trapped on his ranch, with no one but each other to trust, only justice could set them free…and possibly separate them forever.