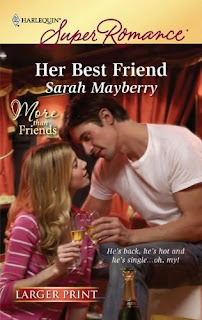 HER BEST FRIEND
Author: Sarah Mayberry
Source: Harlequin Ambassadors
* I received this book free of
charge in exchange for an
honest review*

What’s a girl to do when she’s secretly in love with a friend and he’s married to someone else? She gets over it. That’s what Amy Parker has done. Rather than lose her best bud Quinn Whitfield with an ill-timed, crazy confession of affection, she’s taken the smart route. She’s eased away from him. Just enough to get past the unrequited bits. And you know, it’s working.

Until the day Quinn announces he’s now single. That’s right. He’s single. And he wants to hang out. With her.

Oh, this is so not good for Amy’s equilibrium. Daily doses of Quinn remind her of everything she loves about him. But if he’s free…and she’s free…well, maybe the time has come for one of those crazy confessions.  Get reconnected the way they used to be.

As a lover of sweet and romantic reads, Harlequin is one of my favorite escapes when I am in the mood for a category read mood.  They always have the best short reads that fill in the time between review books.

Amy Parker lived next door to her childhood best friend, Quinn Whitfield.  They were two peas in a pod and rarely apart.  They shared secrets, adventures and even a teething ring when they were babies.  Then at age 14, things change for Amy.  She harbors a secret crush on her best friend.  Unfortunately, Lisa who is their newest addition to the friendship, has decided to set her sights on Quinn.  Amy keeps her secret attraction to Quinn to herself and lets her two best buds have a chance at a relationship.  Lisa and Quinn eventually marry, with Amy standing in as Best Person, and tries to never show how she really feels toward Quinn.  She feels that her friendship with Quinn and Lisa is far more important than the secret crush she has kept to herself for more than 16 years.

When Amy finally buys the Grand Theater, she is finally moving on and fulfilling her dreams.  When she has a few legal troubles during the purchase though, she knows she must make contact with Lisa and Quinn once again and seek their legal advice.  Quinn and Lisa are both successful lawyers, but have failed on the marriage front.  Lisa has an affair and Quinn files for divorce.  To Amy’s surprise Quinn comes to her rescue in court and also agrees to stay a few weeks to help with the remodel of the Grand Theater.  During this time, their love for each other blossoms into more than friendship. Neither one wants to make the first move in fear of losing the friendship the both have together.  Amy also doesn’t want to hurt Lisa, who is still her friend as well, since the divorce is still pending.

Through it all, the author had witty and laugh out loud moments that had me smiling the entire time.  I liked the whole friends before lovers theme and the love that Amy and Quinn had for each other.  Harlequin was even on the money for a cover that represents the story for a change! The couple on the cover is actually how they are described by the author and it features a scene from the book as well! Yes, it is a predictable theme and story, but you can’t help but read about first crushes, long time friendships and happily ever afters.

3 Responses to “Her Best Friend by Sarah Mayberry”