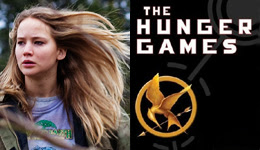 Oscar nominee Jennifer Lawrence (Winter’s Bone) will play the role of Katniss in The Hunger Games, based on the bestselling novels by Suzanne Collins, the Wrap reported. Lionsgate “plans the franchise as a trilogy which will include The Hunger Games, Catching Fire and Mockingjay. Gary Ross (Seabiscuit) is directing the film, which will debut on March 23, 2012.”

Several actors are rumored to be under consideration for the role of Peeta Mellark, including Alex Pettyfer (I Am Number Four), Josh Hutcherson (The Kids Are All Right, Bridge to Terabithia) and Hunter Parrish (Weeds), the Wrap wrote.