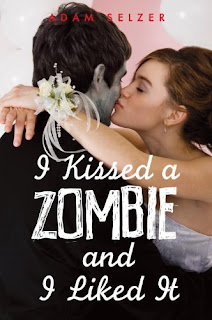 I KISSED A ZOMBIE, AND I LIKED IT
Author: Adam Selzer
Source: Public Library Loan

Algonquin “Ali” Rhodes, the high school newspaper’s music critic, meets an intriguing singer, Doug, while reviewing a gig. He’s a weird-looking guy—goth, but he seems sincere about it, like maybe he was into it back before it was cool. She introduces herself after the set, asking if he lives in Cornersville, and he replies, in his slow, quiet murmur, “Well, I don’t really live there, exactly. . . .”

When Ali and Doug start dating, Ali is falling so hard she doesn’t notice a few odd signs: he never changes clothes, his head is a funny shape, and he says practically nothing out loud. Finally Marie, the school paper’s fashion editor, points out the obvious: Doug isn’t just a really sincere goth. He’s a zombie. Horrified that her feelings could have allowed her to overlook such a flaw, Ali breaks up with Doug, but learns that zombies are awfully hard to get rid of—at the same time she learns that vampires, a group as tightly-knit as the mafia, don’t think much of music critics who make fun of vampires in reviews. . . .

Where do I begin with this review? First of all, I loved the cover! It was cute and playful that goes perfectly with the book.  I liked the character of Doug.  He was my favorite in the book. I cried so hard for him at the end of the book.  The scenes were so touching in the end that I had to get some Kleenex.

What really annoyed me though with this book was the music band references that were on almost every page and in every scene.  If I had to hear about certain bands and artists anymore, I think I would have screamed.  I understand that music played a big part in this book, but I felt it pointless to have to keep repeating it over and over again.  I found that I didn’t like Alley.  One chapter she was against post-humans and then all of a sudden–like the next chapter–she liked them.  It didn’t have a natural progression.

I did like the witty remarks that came out of the characters mouths though.  The one line puns were great! The puns and Doug were basically the only things that kept me interested in finishing the book.  While the last couple of chapters are the best of the book, it still needed a little bit more from the rest of it.

2 Responses to “I KISSED A ZOMBIE, AND I LIKED IT by Adam Selzer”