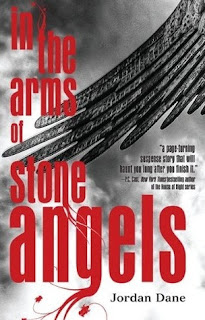 IN THE ARMS OF STONE ANGELS
Author: Jordan Dane
Source: Publisher
*I received this book free of charge in exchange for an honest review*

Two years ago, Brenna did the unthinkable. She witnessed the aftermath of a murder and accused her only true friend–the first boy she ever loved–of being a killer.

Now sixteen, Brenna returns to Oklahoma only to discover that Isaac “White Bird” Henry isn’t in juvie. The half-breed outcast is in a mental hospital, frozen in time, locked in his mind at the worst moment of his life. And when Brenna touches him, she’s pulled into his hellish vision quest, seeing terrifying demons and illusions she doesn’t understand.

Feeling isolated and alone, she’s up against the whole town, targeted by bullying former classmates, a bigoted small town sheriff, and a tribe who refuses to help one of their own. But when Brenna realizes she’s as trapped by the past as White Bird is, this time she won’t turn her back on him. She’s the only one who can free them both.

Even if she has to expose her secret–a “gift” she’s kept hidden her whole life.

At first, I thought this was going to be an awesome and eerie read.  While it had the creepy and dark story I was craving at the moment, it didn’t reach the awesome that I was looking for.  It touches on many subjects including murder, racism, sacrifice, and cruelty.  Usually, this could make for a deep and dark read, but the characters irritated to the point to where I almost didn’t finish this book.


Brenna was the most obnoxious and irritating girl in this book and she was the main character.  I couldn’t stand her from the beginning, she pushed my buttons in the middle, and she still was on my last nerve at the end.  I just couldn’t bring myself to like her character.


White Bird, while at times could have been great, he is in la-la land for most of the book.  He had the potential of saving this book, but there wasn’t much of him in a normal state of mind to enjoy.

Again, while some people might enjoy the angst of the deeper emotions and plot, I was not a fan of it.  I thought the cover was gorgeous, but it didn’t help me enjoy the story. Frankly, the only thing that kept me from rating this as a one star was the small scenes of White Bird when he was lucid.