Today I have the pleasure of introducing you to Mary Margret Daughtridge! She took time out of her busy schedule to answer some interview questions for me.  So let’s get started!

First of all thank you for joining us on My Overstuffed Bookshelf!
Thanks for inviting me, Amy.

I write what I love to read: contemporaries with Alpha heroes in which the plot centers on developing the love story rather than mystery or suspense.

SEALed with a Ring takes a Navy SEAL and mixes him with the CEO of a large car dealership in a marriage of convenience dictated by the needs of relatives whose desires must come first. It’s not long before Davy and JJ have plenty of desire of their own, but the question is: are they ever going to want to be married, and what’s going to happen when they find out they are both getting more than they bargained for?

Secondary characters are often the easiest. They just show up and worm their way into the story—sometimes with no input from me. The other men in the heroine’s life, her former-rake grandfather and Ham, the Vietnam vet handyman were that way. And Blount, JJ’s other boyfriend—he was a hoot to write!

Davy and JJ were the hardest. They didn’t want to get married, and since they are both smart and independent, they could think of lots of ways to avoid it, even though the plot demanded it. Also, I like three-dimensional characters, so they are (I think) admirable, but far from perfect. But I really love them, and I don’t want anyone to think badly of them, so I kind of want to protect them, which can make it hard for me as an author to let them reveal themselves. You can see my own motivations get a little twisty.

Absolutely. Susan Elizabeth Phillips with her funny, sweet, but unrepentantly alpha heroes, and pure romance-romance plots is my hero. I wanted more contemporaries along the lines of hers, so I decided to write some.

A Navy SEAL finds a baby aboard a CIA plane, and turns to a small town doctor for help hiding it. The doctor is determined to protect the baby—she’s just not sure who the baby needs to be protected from so she’s keeping a close eye on both baby and SEAL.

Coffee. It also helps to have some ideas, LOL! And time. I envy writers who can squeeze in an hour here and there. I’m not one of them.

Oh you poor thing! I’m afraid a fly would die of boredom watching me sit at a computer. In fact it would probably pester me, just to make something happen. And then I would have to kill it. Unless it was a telepathic fly in which case it might think watching me explore imaginary people’s heads and hearts (and sex lives) fascinating—but, I’ve got to warn both you and the fly, most of my friends would rather just read the book.

I’m on Facebook with my name misspelled because I can’t figure out how to change it. Look for Mary Margret Daughtirdge. And I have a website, http://marymargretdaughtridge.com/, but if you type it into Google, it will ask if you meant Mary Margaret Daughtridge. You didn’t. Twitter? No Twitter yet. I’m too ADHD as it is.

Thank you so much for joining us! Feel free to stop by anytime and say hi!

It’s been great fun! I’ll hang around in case any of your readers have questions of their own, or comments I can respond to.
SEALed WITH A RING BY MARY MARGRET DAUGHTRIDGE—IN STORES MARCH 2010 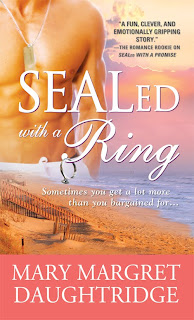 She’s got it all…except the one thing she needs most
Smart, successful businesswoman JJ Caruthers has a year to land a husband or lose the empire she’s worked so hard to build. With time running out, romance is not an option, and a military husband who is always on the road begins to look like the perfect solution…
He’s a wounded hero with an agenda of his own
Even with the scars of battle, Navy SEAL medic Davy Graziano is gorgeous enough to land any woman he wants, and he’s never wanted to be tied down. Now Davy has ulterior motives for accepting JJ’s outrageous proposal of marriage, but he only has so long to figure out what JJ doesn’t want him to know…
ABOUT THE AUTHOR

Mary Margret Daughtridge has been a grade school teacher, speech therapist, family educator, biofeedback therapist, and Transpersonal Hypnotherapist. She is a member of Heart of Carolina Romance Writers, Romance Writers of America, and Romancing the Military Soul, and is a sought-after judge in writing contests. She resides in Greensboro, North Carolina. For more information, please visit http://marymargretdaughtridge.com/.
CONTEST:
Thanks to Danielle from Sourcebooks I have 2 copies of Sealed with a Ring to giveaway. That means 2 winners!!!!!
Here are the rules:
1.  You must be a follower of my blog.
2.  Leave a comment with your email address.
3.  You must live in the USA or Canada only. No PO Boxes.
Contest will end on 3/11/2010 with the winner announced on 3/12/2010.
GOOD LUCK!