Today I am happy to interview Jennifer Armintrout for our Q&A this week! As some as you know, Jennifer is the genius behind the Blood Ties Books. There are four of them in all and are available for purchase already. They include the following:

Today Jennifer is here to announce a new series that will be available for purchase October 1, 2009. This is an exciting time for me because I am a HUGE fan of her writing! This girl can write! So here is the pictures of the new series with my Q&A following: 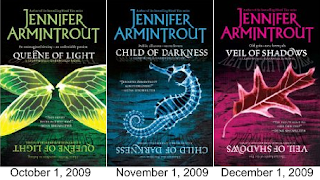 Hi Jennifer, Welcome to My Overstuffed Bookshelf! Glad to have you here. To start off can you tell the readers a little about yourself?
Well, I’m a mom to two kids, I live in a very small town in Michigan, and I’m a very irresponsible and disorganized person.
Can you tell us a little about your new releases coming up?
I have a trilogy of back-to-back-to-back releases in October, November, and December. Which will never happen again, because that is an ungodly amount of work in short amount of time. Basically, the story takes place in a time when humans have irreparably damaged the division between the physical world and the world of fairy tales and nightmares. Now, both worlds are stuck together on Earth, and the creatures who are trapped here are not happy. The first book, Queene of Light, tells the story of Ayla, a half-human faery who works as an assassin for the faery court in the Underground, the huge city in the sewers that the creatures have established. The other books, Child of Darkness and Veil of Shadows, continue the story.
When did you start writing? How did you decide what to write?
Everyone says, “I’ve been writing since I was a child,” and it’s true that I wrote stories when I was younger, and eventually I moved on to fan fiction when I was a teenager, but I never thought I would actually be a writer. My grandmother, Peggy Hanchar, wrote historical romance in the eighties and early nineties, and she always kind of pushed me to be a writer. It wasn’t until after I dropped out of college that I considered writing for real, and by the time I made that decision, it seemed pretty clear that I should write something I found interesting, myself. I’ve always been a big fan of vampire movies and books, so writing my first series, Blood Ties, was kind of a no-brainer. After that, I got bored of vampires and kind of moved along to new ideas. Basically, if I would read it, I will write it.

When your not writing what kind of books do you like to read? Do you have any favorite authors, that are must reads?
I read basically anything. More genre fiction than anything, really, because I don’t have the patience for a lot of literary fiction. It can be so gloomy, and it’s like, “Okay, I guess you’re asking tough questions and really examining what humanity is capable of and the tragedies that people can endure, but… man, you’re bringing me down,” so I don’t read that kind of thing that often. My husband’s step-mom lent me The Lovely Bones to read and I almost slit my writsts in the bathtub. As for authors, again, I read just about anything. My favorites in Paranormal Romance/Urban Fantasy are Gena Showalter and Charlaine Harris, but I always feel like a jerk for mentioning anyone because I think, “God, what if someone I know who writes reads this and thinks I’m mean for not mentioning them?”
What are 3 things that are “must haves” for you when you sit down to write a new book?
1. An idea.
2. A contract offer.
3. Diet Coke.
I really don’t write anything (besides fan fictions) that I don’t know I’m going to get paid for, and I’m looking into having my blood replaced with Diet Coke.

As a fan of your Blood Ties series, can readers expect to have the same darkness that was felt in that series in your upcoming series, or is it going to be a little lighter and more humorous?
I think the Lightworld/Darkworld novels, the ones that are coming out this fall, are darker than the Blood Ties series. Blood Ties was a little more accessible because the protagonist, Carrie, was relatable on a human level, and she used human emotion to make her decisions. If something really horrible happened, she thought, “God, that’s really horrible.” In Queene of Light, Ayla is an assassin, and while she has a very human side to her, she rejects those emotions and feelings. If something horrible happens in her world, she’s probably the one who caused it.
Okay I am going to ask you to answer the following quickie questions:
Your favorite character from Blood Ties: Carrie is the one I feel closest too, because I was in her head so much. But Max is the one I could see hanging out with, because he’s the most like me.

Your favorite thing to do in your downtime: Farm Town on facebook. Not even kidding, that is the most addictive game ever. And it’s so stupid. I feel ashamed for liking it so much. “Yeah, I could have been playing through Heavenly Sword again, but I’m playing Farm Town instead.”
If you were a vampire, bagged or from the neck: From the neck. If I were a vampire, I would kill so many people. I have a mental list of who goes first, when that day comes.
Your favorite paranormal creature: I know you mean vampire or werewolf or whatever, but I’m going to willfully misinterpret the question and say Jareth, the Goblin King.

I want to thank Jennifer so much for taking the time to do this for me! She truly is an awesome author!! Be sure to go check out her site and pick up her current books that are out! And while you are it go pre-order her new series too!

2 Responses to “Interview with Jennifer Armintrout”