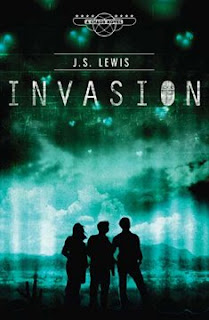 INVASION
A C.H.A.O.S. Novel
Author: Jon S. Lewis
Source: BookSneeze
*I received this book free of charge
in exchange for an honest review*

He didn’t ask for the job, but now all that stands between us and chaos… is Colt

Colt McAlister was having the summer of his life. He spent his days surfing and his nights playing guitar on the beach with friends. He even met a girl and got his first car. But everything changes when his parents are killed in a freak accident.

He’s forced to leave his old life behind and move to Arizona with his grandfather. The only person he knows at the new high school is a childhood friend named Dani. And Oz, a guy he’s sure he’s never met but who is strangely familiar.

But what if his parents’ death wasn’t an accident? His mother, an investigative reporter, was going to expose a secret mind-control program run by one of the world’s largest companies. Before she could release the story, what if agents from Trident Biotech made sure she couldn’t go public?

Vowing to uncover the truth, Colt gets drawn into a secret world of aliens, shapeshifters, flying motorcycles, and invisible gateways.

The Invasion has begun.

What originally attracted me to this novel for review was the cover.  It has the eerie and sci-fi look to it.  Granted, I am not a huge fan of science fiction but the cover kept calling to me.


In the first book of a series, Colt McAlister is a surfer, youngest of seven brothers, and has a crush on a girl like any normal 16 year old boy.  Unfortunately, he is far from normal whether he knows yet or not.  When his parents die in an accident he is forced to move in with his Grandfather in a different state,  Colt gets a mysterious text stating that his parents’ death was not an accident.  After the text, Colt is sucked into a world that you would find in comics. From that point on, Colt and his childhood friend Dani and new friend Oz, must find a way to save the world from Aliens.


Again, I am not a huge fan of science fiction, yet I found myself drawn into the story and felt like I was on the adventure with Colt.  The writing was good and flowed nicely.  The suspense was great and the action was fast paced.  The book was just what a science fiction book would be about without being boring!  I feel that teens and adults will both enjoy the story as well as it being great for both boys and girls.  Granted, it isn’t a favorite book of mine, but it was a great read for someone who is just venturing into the Science Fiction genre with hesitancy.