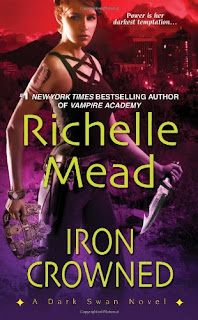 Shaman-for-hire Eugenie Markham is the best at banishing entities trespassing in the mortal realm. But as the Thorn Land’s queen, she’s fast running out of ways to end the brutal war devastating her kingdom. Her only hope: the Iron Crown, a legendary object even the most powerful gentry fear. . .

Who Eugenie can trust is the hardest part. Fairy king Dorian has his own agenda for aiding her search. And Kiyo, her shape-shifter ex-boyfriend, has every reason to betray her along the way. To control the Crown’s ever-consuming powers, Eugenie will have to confront an unimaginable temptation–one that will put her soul and the fate of two worlds in mortal peril. . .

I haven’t had a chance to really read much by this author.  I admit to owning her books, but something has always come up and I haven’t had a chance to read much by her.  I received this book for review and after reading the back cover it seemed like a book that I would enjoy.  Even if I haven’t read the other books in the series, I though I might still have a chance at understanding the book and gain an interest in a new series.

While I tried over and over again to enjoy this book,  I found myself struggling to finish it.  I didn’t care for the character of Eugenie.  She fell flat and in a word I hate to use, well, shallow.  She hindered the story from being so much more, even though she was suppose to be the main character.  Her personality was immature and she was predictable after a few chapters into the book.

I was so frustrated with how the author had written this character that it might have hindered my feelings of enjoying the story.  I just couldn’t get past all the idiotic actions and reactions that Eugenie had.  While the book was not a complete loss, but it also wasn’t a success in my opinion.  I think I am going to stick to her young adult themed books in the future.