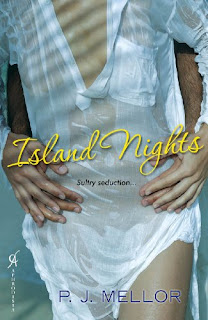 ISLAND NIGHTS
Author: P.J. Mellor
Source: Publisher
*I received this book free of charge in exchange for an honest review*

Checking out an old hotel on a remote island seems like a waste of time to Reese Parker. Why is her boss interested in this out-of-the-way place? And then she meets the ruggedly handsome and incredibly sexy Ben Adams…

All it takes is one kiss and Reese is consumed by desire. She wants to strip him naked, touch and taste his body, and surrender to the searing passion that burns within her…

The book starts out with Reese Parker searching her office for some paperwork.  After hearing some unusual noises coming from her bosses office,  Reese finds herself watching her boss in the act of some naughty play.  She finds herself highly aroused and ready for her business trip on an island called Sand Dollar.  What she isn’t ready for is Ben Adams.

The chemistry between the two was humorous and sexy.  They both like to antagonize the other while fighting the sexual attraction that is growing between the two.  I liked the characters of Reese and Ben.  They were both fun to read about and the sparks were intense.  What I didn’t like too much was the side characters.  Bailey and Paige were just okay, but I felt the book would have been better without those two.