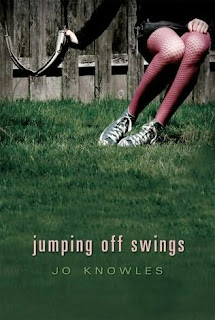 
One pregnancy. Four friends. It all adds up to a profound time of change in this poignant, sensitively written YA novel.

Ellie remembers how the boys kissed her. Touched her. How they
begged for more. And when she gave it to them, she felt loved. For a
while anyway. So when Josh, an eager virgin with a troubled home life, leads her from a party to the backseat of his van, Ellie follows. But their “one-time thing” is far from perfect: Ellie gets pregnant. Josh reacts with shame and heartbreak, while their confidantes, Caleb and Corinne, deal with their own complex swirl of emotions. No matter what Ellie chooses, all four teenagers will be forced to grow up a little faster as a result. Told alternately from each character’s point of view, this deeply insightful novel explores the aftershocks of the biggest decision of one fragile girl’s life — and the realities of leaving innocence behind.

The main focus is on Ellie.  She is the teenager who is looking to be loved, but as soon as she sleeps with the boy, they leave her.  Basically, the school thinks she is the Slut of the school.  Corrine is Ellie’s best friend.  She is with her through every step of the book.  I found their friendship to be sweet and believable.  Josh is the last boy that Ellie is with.  He loses his virginity to Ellie because he is tired of being harassed by the other boys at school.  He feels bad for using Ellie, but he doesn’t mention it to her.  Caleb is friends with all three of them.  He hates being in the middle because he has always loved Ellie.  The one night between Josh and Ellie causes major problems for all the teens involved.  Ellie finds herself a pregnant teen and has to make a decision on whether she should keep the baby, give it up for adoption, or have an abortion.  She finds strength from her close friends and some unexpected people as well.

While I wasn’t a fan of the 4 point of views, the story was good.  I know a lot of schools have teenager’s who are dealing with teen pregnancy.  I know teens would feel lost and scared without knowing who to turn to.  This would be a wonderful read for a teenager, whether boy or girl, and touches on a sensitive topic that teens are reluctant to talk about.

One Response to “Jumping Off Swings by Jo Knowles”