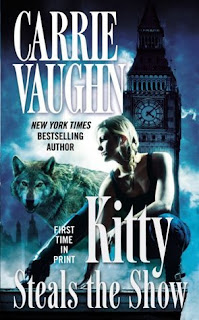 Kitty has been tapped as the keynote speaker for the First International Conference on Paranatural Studies, taking place in London. The conference brings together scientists, activists, protestors, and supernatural beings from all over the world—and Kitty, Ben, and Cormac are right in the middle of it.


Master vampires from dozens of cities have also gathered in London for a conference of their own. With the help of the Master of London, Kitty gets more of a glimpse into the Long Game—a power struggle among vampires that has been going on for centuries—than she ever has before. In her search for answers, Kitty has the help of some old allies, and meets some new ones, such as Caleb, the alpha werewolf of the British Isles. The conference has also attracted some old enemies, who’ve set their sights on her and her friends.


All the world’s a stage, and Kitty’s just stepped into the spotlight.

I admit that I have this entire series sitting on my shelf and have yet to read them.  I have been dying to read them from book one, but when I was sent this book for review I decided to read it first.  I will say that you should start from the beginning of this series because I feel like some things went over my head and characters that were referenced had no impact for me.  If I had read from the beginning I think I would understand the world better and who was who before getting halfway through the book.

That being said,  I still enjoyed the book.  I loved the world that author Carrie Vaughn created and the character of Kitty was pretty interesting.  I like how the author portrays her in the book and she actually held an appeal of being the main character.  She has a backbone and doesn’t back down which is hard to find in the female characters.  The scenes in London were described beautifully and made this reader feel like I had just entered the London streets.  There were plenty of twists and turns that were perfectly paced and kept me reading from start to finish.

Overall I was pleasantly pleased by this book.  I have heard good things and bad things about this series.  After reading this book though, I look forward to reading from the beginning books so I can form my own opinion on the series as a whole.  Definitely a series that will be kept on my radar for future purchases and maybe even featured in my Spotlight Series of the Month further down the road!