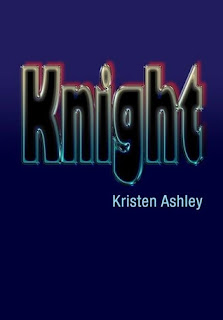 Anya Gage has learned that to get anything good in life, you have to work for it. She has no expectations, no dreams.

Then she finds herself at a party where she doesn’t want to be and she meets Knight.

Knight Sebring knows who he is, what he wants and what he likes. And he gets it. But he never expected something as sweet as Anya Gage to wander into his bedroom during a party he did not expect to be having to borrow his phone.

Knight tries to leave Anya to the life she deserves of white picket fences and a man who watches football on Sundays – good, normal and clean. But when Anya comes to his nightclub and finds herself in a situation, he knows someone has to look after her, he can’t fight it anymore and he decides that man will be him.

Knight teaches Anya that, just as with the bad, in life you should also expect the good. And he teaches her this by giving it to her.

But Knight has a dark past and just as he desires Anya for exactly who she is, he fears when she finds out exactly the man he has become and always intends to be, she’ll leave him for good, normal and clean.

After hearing how much everyone states that the books by Kristen Ashley are like crack for book addicts,  I decided to venture into this new addiction.  Most people have told me that if I want to get addicted to this particular author I shouldn’t start with Knight.  After finishing up this book, I find myself agreeing with this.  Knight to me was ‘meh’ and one that gave me the heebie-jeevies several times while reading it.

If I had to hear Knight refer to himself as “Daddy” one more time while they were exploring their sexual relationship, I think I would have broken out in hives from the scared stranger-danger associated with sexual predators.  Seriously, “Daddy” is not a pet word that I enjoyed reading in the bedroom.

Another thing that was a big turn off for me was the way Knight spoke.  I had to constantly reread what he was saying several times to even understand a part of what he was trying to say.  It was like a foreign language to me at times. Plus he had the bad habit of saying “F*ck” so many times in a sentence that I think it was his first word as a child.  Every other word out of his mouth — or every other sentence at least — had this word in it and I just couldn’t understand the reasoning in this.  Yes, he is a bad guy.  Yes, he is a tough guy.  Yes, we should be scared of him because he is truly a dangerous man.  Even with all of this taken into account, it still didn’t need to be applied to make the story enjoyable.  If anything, it brought the story down for me.

Anya was one I don’t think I could see myself being friends with either.  There was no depth to her character and I couldn’t bring myself to really care what happened to her.  She was plain and borderline boring for most of the story.

I will definitely try reading more from the author based solely on the recommendations to read her other stories for a better reading experience from other readers.  If you are a first time reader of this author, I recommend you starting with another series by her like I should have done.  Save Knight for last if you do plan on joining in on the addiction train.

If the library doesn’t have it, don’t worry about reading it!
BUY IT ON AMAZON