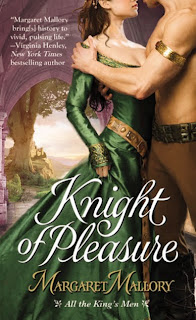 KNIGHT OF PLEASURE
Author: Margaret Mallory
Source: Publisher (Thank you Anna)
* I received this book free of charge in exchange for an honest review*

Lady Isobel Hume is an expert swordswoman who knows how to choose her battles. When the king asks her to wed a French nobleman to form a political alliance, she agrees. But that’s before the devilishly charming Sir Stephen Carleton captures her heart-and tempts her to betray her betrothed, her king, and her country.

IS WORTH THE GREATEST PERIL

Sir Stephen Carleton enjoys his many female admirers-until he dedicates himself to winning the lovely Isobel. When a threat against the king leads Isobel into mortal danger, Stephen must prove that he is more than a knight of pleasure … and that love can conquer all.

“Do you want to learn how to protect yourself?” Stephen asked.

Green eyes sparking with fire, Isobel raised her sword and said, “Teach me.”

“You should carry a short blade as well,” he instructed as he fended off her attack.

“Why? You think you can knock my sword from my hand?”

He forced her to step back, and back, and back again. She threw her hands up, sending the sword clattering against the wall as she tumbled backward.

“I’m afraid you have the advantage of me,” she said, reaching her hand up for him. He took it and sank to his knees beside her.

His eyes fixed on her lips, full and parted. The moment their lips touched, fire seared through him. She was kissing him back, mouth open. Slowly, he lowered his body …

He froze the instant he felt the prick of cold steel against his neck.

“You are right,” Isobel said so close to Stephen’s ear that he could feel her breath, “’tis wise to carry a short blade.”

Q: What inspired you to trade your legal career for writing medieval romance novels? Why?
MM: The short answer is that I went into a midlife crisis after two bosses in a row died young and a third got fired. I could have done a lot worse than to come out of it as a novelist.

Q: How has your extensive years in the law affected your writing?
MM: I was a policy wonk; West Wing was my kind of TV show. Since I like political intrigue, you’ll find the medieval version in my books: conspiracies against the king and wily bishops politicking behind the scenes. On occasion, I’ll throw in an issue around property inheritance or marriage laws. By the way, the best legal status for a female in the middle ages was to be a widowed noblewoman with money.

Q: You make the point in your website that you love history, so what role does that play in the All the King’s Men trilogy?
MM: The biggest challenge is to include enough history—and the right bits—to give the reader a sense of being in a different time and place, without being boring. I love to make real historical figures come alive as secondary characters in my books. In my first book, for example, I make my heroine a childhood friend of Prince Harry (later Henry V) and have her taken hostage by the Welsh rebel whose descendent will many years later start the Tudor dynasty. In my third book, I make Henry V’s young widow, a French princess, a close friend of my fictional heroine. The widowed queen begins her true-life affair with Owen Tudor, her Clerk of the Wardrobe, in that book. (If I made this up, no one would believe it.)

Q: You also mention that you visited Alnwick Castle in Great Britain, which is used as a scene in Knight of Pleasure. What is the significance of this castle? Any other momentous places that have made it into your trilogy?
MM: I use several important medieval castles throughout the trilogy. In the first one, Knight of Desire, my heroine spends time in three of the fortresses built by Edward I as a “Ring of Iron” around Wales. Caen Castle in Normandy is the setting for a number of scenes in book 2, Knight of Pleasure. The prologue of Knight of Passion, book 3, is set in the Louvre in Paris, while the English castles of Windsor, Westminster, Eltham and Leicester figure prominently in other parts of the book.

Q: Aside from travel, what other modes of research have you sought out?
MM: I do on-line research, gets books from libraries, and buy a few books on-line. For my third book, websites for the City of London and London Bridge Museums have been very helpful, as well as a book I bought on medieval architecture.

Q: What would you like readers to walk away with after reading your books?
MM: I want to sweep my readers away to another time and place. Women need pleasurable escape reading. I want my book to help them forget about the hassles of their day and to leave them with a warm and satisfying happy ending.

MARGARET MALLORY recently surprised her friends and family by abandoning her legal career-and her steady job-to write tales of romance and adventure. At long last, she can satisfy her passion for justice by punishing the bad and rewarding the worthy-in the pages of her novels, of course. She lives in the beautiful Pacific Northwest with her husband and their two college-age children. KNIGHT OF DESIRE is her first book so she would dearly love to hear from readers.

Thanks to the publisher, I have 5 copies up for grabs! Here are the rules:
1. Copies will be sent directly from the publisher.
2. Only residents of the U.S. or Canada are eligible to win.
3. No P.O. Boxes are allowed.

1. You must be a follower of my blog.
2. Leave a comment with your email address for your entry.
3. Contest is open until Dec. 12th, 2010. Winners will be announced the following day. You will have 48 hours to respond.
GOOD LUCK!