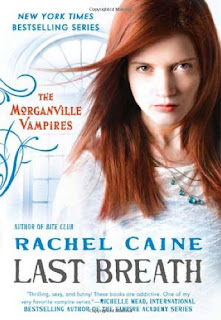 With her boss preoccupied researching the Founder Houses in Morganville, student Claire Danvers is left to her own devices when she learns that three vampires have vanished without a trace. She soon discovers that the last person seen with one of the missing vampires is someone new to town—a mysterious individual named Magnus. After an uneasy encounter with Morganville’s latest resident, Claire is certain Magnus isn’t merely human. But is he a vampire—or something else entirely?

Oh Morganville,  I have missed you!  This is one of those series that just keeps pulling you in with each story the author creates.  I just love revisiting Morganville and the town to get my vampire fix!

The book starts out with the planning of Eve and Michael’s wedding.  They are trying to get the permission needed in a vampire/human marriage from Amelie while also trying to get the humans to agree to it as well.  During the process of the planning, vampires start to disappear when a new face shows up in town named Magnus.  Magnus is not human, but he is not quite vampire either.  When Claire starts to piece together who he really is, the town is already in battle and beloved characters will be lost to the fight.  While Amelie wants the vampires to run and find a new home,  Claire and her friends are determined to save their town.

I have to say that this book in the series I think is my favorite so far.  Not only did so many things happen that the reader will not expect, but the way the author changes the Point of View around was greatly satisfying.  The series has been focused mainly on Claire’s Point of View (POV), but in Last Breath we get to read from Shane, Eve, Michael and Amelie as well.  We got to see glimpses of what each character was feeling and thinking throughout the story.  The only character that I hoped she would include was Myrnin, but we never get to see inside his crazy head. Hopefully in the next book she will explore his mind as well.

If you plan on reading this book from the series, have some tissues on hand and be prepared for your emotions to be thrown all over the place.  You will cry, gasp in suspense, cringe in fear and be yelling for your favorites to win!  One of the best in the series of eleven so far!