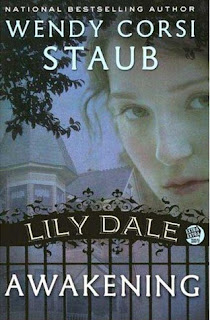 Calla thought that her boyfriend breaking up with her in a text message was the worst thing that could ever happen to her. But just two weeks later, her mother died in a freak accident, and life as she knew it was completely over. With her father heading to California for a new job, they decide that Calla should spend a few weeks with the grandmother she barely knows while he gets them set up.   To Calla’s shock, her mother’s hometown of Lily Dale is a town full of psychics—including her grandmother. Suddenly, the fact that her mother never talked about her past takes on more mysterious overtones. The longer she stays in town, the stranger things become, as Calla starts to experience unusual and unsettling events that lead her to wonder whether she has inherited her grandmother’s unique gift. Is it this gift that is making her suspect that her mother’s death was more than an accident, or is it just an overactive imagination? Staying in Lily Dale is the only way to uncover the truth. But will Calla be able to deal with what she learns about her mother’s past and her own future?


When I saw this book at a library sale, I thought the cover was kind of eerie and the summary sounded great.  I haven’t read any books by Wendy Corsi Staub, so this was a new to me author.  I was pleasantly surprised by the book.  The author had a writing style that was easy flowing and kept me interested until the end.


When Calla’s Mother passes away, she starts seeing unusual things.  Ghost are appearing to her, but she refuses to believe in them.  After her Father moves to California for a job offer, Calla decides to stay the summer with her Grandmother Odelia.  Reluctantly, her Father agrees to it for the summer while he finds them a place to settle into in California.  Calla has not spent much time with her ‘Gammy’ and doesn’t even know what Odelia does for a living.  She quickly realizes though, her Gammy is a Medium.  She speaks with the dead.  While Calla adjusts to Odelia’s lifestyle and community of Mediums, she starts to discover she might have inherited it as well.


I loved Calla and Odelia in this book.  Odelia was a riot with the way the author describes her personality and dress attire.  I also loved how Calla found new friends who seemed to genuinely want to be close to her.  I didn’t like the whole ex-boyfriend storyline, but I am assuming it will develop into a planned plot in the future books or maybe just be a hint at why Calla is having a hard time choosing between two other boys in town.  I wasn’t a fan of Blue.  Now my feelings on him might change as I read more of the series, but in this book he seemed a little snobby.  I wanted Calla to explore more of a relationship with Jacy instead.  So for now, I am Team Jacy in the love triangle.


Overall this was a great book to a new series for me.  I can’t wait to see what unfolds in the next book with the cliffhanger ending this one leaves the reader with.  Mysteries will unravel and I am anxious to know if Calla is finally going to embrace her psychic ability.