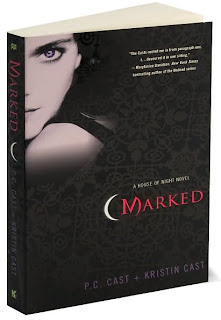 Marked is the first book in the House of Night series. PC Cast and Kristin Cast worked together writing this book and boy did they do great! This book pulls you in from the first chapter. It starts out at a normal high school, when the main character Zoey, is marked by a tracker. Once a person is marked they must go to lice at the House of Night school or die. Most people would want to stay with their parents but Zoey actually sneaks out to go because she can’t stand her spineless mom and her over bearing stepfather. Zoey soon realizes that the Goddess Nyx has given her special powers, also causing her to be an oddity at her new school with a different mark than others. Soon she realizes that the Goddess has given her these new gifts to stand up to the head of the Daughters of the Night, which is like a sorority at this school, and make the school a better place for new vampyre fledglings. But does it come with a cost? Well, you will have to read the book to find out because I am not about to give away the spoilers!! This book has opened my eyes even wider to the Young Adult sections in the book stores and libraries.

My Grade For This Book: A+
House of Night Website

Back of Book:
Enter the dark, magical world of The House of Night, a world very much like our own, except here vampyres have always existed. Sixteen-year-old Zoey Redbird has just been Marked as a fledgling vampyre and joins the House of Night, a school where she will train to become an adult vampire. That is, if she makes it through the Change–and not all of those who are Marked do. It sucks to begin a new life, especially away from her friends, and on top of that, Zoey is no average fledgling. She has been chosen as special by the vampyre Goddess Nyx. Zoey discovers she has amazing powers, but along with her powers come bloodlust and an unfortunate ability to Imprint her human ex-boyfriend. To add to her stress, she is not the only fledgling at the House of Night with special powers: When she discovers that the leader of the Dark Daughters, the school’s most elite group, is misusing her Goddess-given gifts, Zoey must look deep within herself for the courage to embrace her destiny–with a little help from her new vampyre friends.