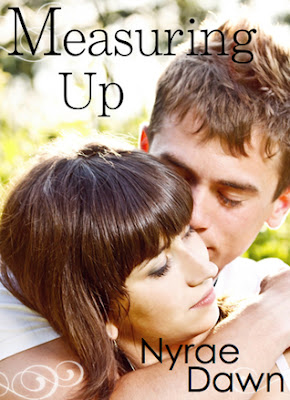 Seventeen-year-old Annabel Conway is tired of the Hillcrest High School elite making her life miserable because she’s not a size two. This summer, she’s hiring a personal trainer to help her lose weight.

Annabel doesn’t expect her trainer to be a gorgeous guy around her age. Boys like Tegan are jerks. They pretend to like girls like her so they can make an idiot out of them. Been there, done that. Totally not going there again. She kind of hates him on principal. Blond. Muscular. Funny. It doesn’t help that he knows her measurements!

Soon, Tegan’s so much more than that. He’s the boy who teaches her to box when she has a bad day. Who jogs with her and lets her set the pace. Who kisses her until she melts. He makes her feel beautiful regardless of what the scale says. Unlike her mom, he doesn’t expect perfection, and he doesn’t try to shield her from the world like her dad and best friend. Tegan likes her the way she is.

But what happens when he’s not there? He can’t always be there…

Will Annabel be able to stand on her own and learn that she already measures up? That her worth doesn’t lie in what the world thinks, the scale says, or even what Tegan tells her—but in herself?

After finishing up a previous book by this author and having a few problems with her writing, I decided to give it another chance and try something again.  The last book had a better second half of the story, but this one had a better first half.

While I enjoyed reading about a character who is struggling with being overweight, I felt the author tended to focus on it a little too much.  It seemed like every page the reader was having to hear the character of Annabel complain about her weight.  I know the main part of this story is in dealing with weight and finding love in a skinny world, but it did get to the point of too much.

Again, there was inconsistency in the story as well.  It flowed in parts, but other parts were choppy.  If an author is going to include texting as well as dialogue, the author needs to know how to make that defined and not have the reader trying to guess what is text and what is speech. That is something that really irked me about this book because I had to reread it several times to grasp what was what.

I also was not a huge fan of Tegan.  His issues seem valid, but not enough to become believable in the extreme of why he does what he does near the end.

This book is full of cliche teen angst and drama, but it still wasn’t a bad read.  I have come to the conclusion that this author is just going to be another okay author in my reading tastes.  While this is not a bad thing, it isn’t a great factor as a returning reader of the future works by her.  Younger readers will more than likely enjoy this more than older adults.