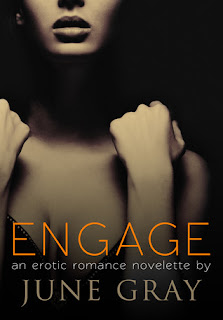 The past has a way of catching up…

A long time has passed since Elsie’s heart was broken, since the person who always shielded her from pain broke her heart. Just when she begins to rebuild, Henry returns and upends everything all over again.

Engage is the fifth installment in the Disarm series by author June Gray.

When we first start reading this installment, it is five months after Henry left Elsie. We are back to reading from Elsie’s POV.  While I am a little disappointed that we have switched back to her POV, it isn’t as bad as I thought it would be.  The last book quenched my thirst for his side and now we get to see the fall out on Elsie’s side.  She is having a hard time moving on from Henry.  He was her happily ever after and he ripped it away from her like a mother pulling a bandage off.

Then we flash forward another 10 months and just as Elsie is starting a new relationship, Henry comes back.  He has finally found his way and himself.  He also is planning on winning Elsie back even if it takes the rest of his life.  He even drops the bomb to her that he has given up the military for her.

The first part of this book was a little ho-hum for me.  It was depressing and I really got tired of hearing about how she will never get over Henry.  Then when Henry comes back, the story takes off again.  This series is definitely one where the hero is what makes it so good.  When Henry comes onto the page it just sucks the reader in.  While I still don’t believe how he had to ‘find himself’ to make the relationship work, I agree that it did make the story richer and have the characters grow.

I think the best part about this installment though is when Henry takes Elsie to Dallas for a surprise gift.  What he reveals to her was quite a surprise in those few chapters.  Why it did seem to come out of left field and probably just something that needed to help the story arc, it was still sweet.

This isn’t my favorite in this series, but it is one that matured the characters and helped them find their own way.  I am looking forward to reading the final book in this series and I am keeping my fingers crossed that Henry doesn’t blow it again! Bring on the HEA!