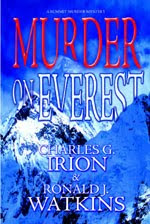 When Derek Sodoc, only son of the world’s richest and most powerful man, dies attempting to climb Everest, questions are raised. Why did he fail? Was he left to die? He had the finest equipment, state-of-the-art communications, the very best guides. His death took place amid the glare of the world’s media and now, one year later, surviving members from that expedition are sent to recover his body the following year. What really happened when Derek died? Did Scott Devlon, Derek’s trusted friend abandon him to die? What about his guides? And the other climbers? Join us on this extraordinary journey as we explore high adventure atop the seven major continental summits beginning with Murder on Everest. Was Derek murdered? Will the mountain extract its own deadly justice? Was it the mountain? Or perhaps something far worse …

MY THOUGHTS:
I found this book to actually be a great read! It wasn’t anything like I expected. There is plenty of suspense and drama and the writing is nicely detailed without going overboard.  The characters were interesting and it kept my interest all through the book.  The author seemed very knowledgeable of  mountain climbing. I actually understood what he was trying to explain.
Overall a great read, but not one I would read over and over again. I think it is because it is not my usual type of book though, not because it wasn’t well written.  A great story to capture your interest all the way until the end!
MY RATING:

One Response to “MURDER ON EVEREST by Charles G. Irion & Ronald J. Watkins”