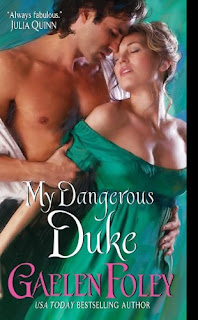 Author: Gaelen Foley
Source: Publisher
* I received this book free of
charge in exchange for an
honest review*
SYNOPSIS:
The Inferno Club: In public, this scandalous society of London aristocrats is notorious for pursuing all manner of debauchery. But in private, they are warriors who would do anything to protect king and country . . .
They say that the very name of Warrington is cursed . . .
From a time as old as the cold stone of the duke’s ancestral castle, the Warrington men have been plagued by tragedy. But Rohan Kilburn, the Duke of Warrington, has vowed to escape the predestined torment by forsaking love and devoting his life to the Inferno Club and its secret mission.
And then she is brought to him unbidden by cutthroats hoping to calm the duke’s infamous temper—a sacrificial virgin of sorts. But even overpowered, Kate Madsen will be no man’s sacrifice. And the duke’s price for claiming her may be what he has sworn never to give—the heart he has so long and fiercely guarded—to the beautiful hostage he was never meant to love.
MY THOUGHTS:
I am very picky about my Historical and Regency Romance books.  I have slowly started reading more and more of these type of books recently and was thrilled when the publisher sent me this book for review.
First of all, lets go over the good points.  The story seemed to be like a retelling of Beauty and the Beast.  I love it when authors do this intentionally or not even realizing they are doing it.  When a book is an adaptation of some of my favorite fairy tales, I am instantly attracted to it. We have the beautiful bookworm Kate, who is kidnapped and given as a gift to The Beast Rohan.  Now even though they call him The Beast, it is not because he is ugly or anything. In fact, he is very handsome.  He has a reputation though of killing, being hard core, and cursed to boot!  The treasure hunt near the end of the book was fascinating and fun.  There is witty dialogue that made some fun moments mixed into the serious moments.
Now for the bad of the book.  While I like the characters of Rohan and Kate, I just couldn’t get the two to click when put together.  There didn’t seem to be any sparks between the two.  The only time I really liked them together was when they were bickering and when they were on the treasure hunt.  The steamy scenes were in fact hot, but it felt too forced between the two.  I also couldn’t stand all the filler in the book.  I don’t want a crash course in history when I am reading the book.  Yes, some of it pertained to the plot, but a lot of it just filled like the author was trying to fill the pages to meet a page count.  Also, why do we have to hear the titles so many times? I know he is a Duke, and his friends are of royalty titles as well, but do we have to be reminded of it every time they are reintroduced in a chapter or scene?
Overall, the book was good as a stand alone even though it is part of a series.  The plot was fun, the bickering was fun, but the rest was just okay.  I would still read something else by this author, but I would be hesitant in buying it first.
MY RATING:

One Response to “MY DANGEROUS DUKE by Gaelen Foley”