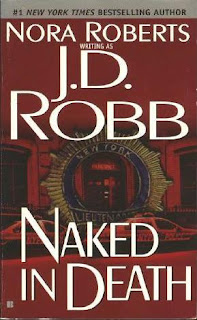 In a world of danger and deception, she walks the line–between seductive passion and scandalous murder… Eve Dallas is a New York police lieutenant hunting for a ruthless killer. In over ten years on the force, she’s seen it all–and knows her survival depends on her instincts. And she’s going against every warning telling her not to get involved with Roarke, an Irish billionaire–and a suspect in Eve’s murder investigation. But passion and seduction have rules of their own, and it’s up to Eve to take a chance in the arms of a man she knows nothing about–except the addictive hunger of needing his touch.

I have never had much interest in reading mysteries.  I am a reader who likes my books simple but fun.  I don’t like having to think too much while trying to enjoy a story.  Little did I know that I was wrong.  After hearing so much hype around this series by J.D. Robb — who is actually Nora Roberts — I finally caved and decided to venture into this genre of reading.  I had to see what all the fuss was about and to finally figure out what all the other people were swooning about whenever ‘Roarke’ was uttered in a sentence.

Lt. Eve Dallas is searching for a serial killer.  A killer that takes enjoyment in killing licensed prostitutes while playing mind games with the police is just the tip of the iceberg in this story.  While Eve is trying to pin down who the killer is, she is also dealing with other cases, political personnel who think they are owed their undivided attention, and a suspect who is quickly becoming a person of interest in her personal life.  Now granted,  I guessed the killer early on but it still was a surprise to discover I was actually right!  I also found that the mystery part of the book wasn’t at all difficult to follow along with.  The author did a wonderful job of only revealing certain things at certain times to keep the reader second guessing.

Now lets talk about Roarke.  Hotness has entered the pages and taken over this readers imagination!  Roarke demands attention and leaves you wanting more.  I couldn’t wait until Roarke stepped into a scene in the book because he brings Eve to life and leaves the reader drooling.  He is smart, rich, sexy and has an accent — the ultimate reader fantasy!  Eve struggles not only with personal reasons in letting Roarke into her life, but she also deals with job fallout as well when they get hot and heavy.  I was cheering for Eve and Roarke the whole time and I loved how Eve finally opened up to him.  I can’t help but think that Eve still has a bunch of history to work out in future books involving her past.  I also can’t wait to learn more about Roarke’s past as well.

I admit that my review is a little scarce on the plot, but I am worried about giving too much away in case you haven’t read it yet.  I will tell you that there are some amazing side characters as well and that the main characters will keep you interested up until the end.  I am now a new fan of romantic suspense that author J.D. Robb obviously knows how to write.  Bring on the next book because it is going to be a fun ride to read about!

“I want to see you again.” He stopped, took her face in his hands. “I need to see you again.”
Her pulse jumped, as if it had nothing to do with the rest of her. “Roarke, what’s going on here?”
“Lieutenant.” He leaned forward, touched his lips to hers. “indications are we’re having a romance.”