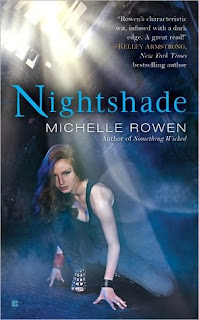 Jillian Conrad never believed in vampires-until she was unwillingly injected with a serum that was supposed to act as a deadly poison to them. Now, tormented half-vampire Declan Reese wants her blood to destroy the undead kingdom. Unfortunately, the serum has also made her blood irresistible to all vampires-including Declan, whose desire for Jillian is more than mere hunger.


I have always been a big fan of author Michelle Rowen! I loved her feisty and fun Demon Princess series, but I also fell in love with her Immortality Bites series that was full of romance and quirky humor.  When I noticed she was starting a new and darker series, I jumped on the fan band wagon and purchased a copy to read!  The author did not disappoint even if the series is darker than her other books.


Jillian finds herself held captive during a stand off between Declan — a vampire assassin — and a scientist.  When the scientist injects a poison called Nightshade into her neck, she doesn’t realize she is now a pawn in a vampire war.  Declan is not only a vampire assassin, but he is also half vampire himself.  He takes a serum to keep his vampire side suppressed  but it also makes him a cold robot of a man.  When he takes Jillian with him to his compound, he realizes that her blood is different and she has an addictive scent to her now.  The Nightshade that is poisoning her system is the ultimate weapon to destroy vampire’s.  They can’t resist her blood, but it kills them within minutes of drinking it.  Together, they have to find a way to cure Jillian of the poison, but they also have to fight their growing attraction.


I loved Declan and Jillian.  She was strong and determined, but she also had a soft side.  She didn’t fall fast for Declan as most heroines of a book do.  She couldn’t stand him for a bit.  Declan is horribly scarred and cold.  He is not your typical and gorgeous hero.  He has flaws, but ones that make him into the hero we want.  He protects Jillian with everything he can and his only fault is trusting the wrong people.  When they confront the King of the Vampires, I thought there was going to be a huge show down.  What you get is not what you expect though.  The author pulls the rug out from underneath you and leaves you not knowing who is the bad guy, the good guy, or who to cheer for!  I loved the way it ended even if there were some tears in my eyes.  It leaves you craving the next book in the series so we can see what will happen next, but it also leaves the reader satisfied at the conclusion of the book.


Another great series to add to my obsession with this authors writing!  I can’t wait until I get my hands on the next book in the series!