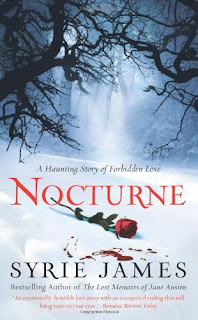 NOCTURNE
Author: Syrie James
Source: FSB Associates
*I received this book free of charge in exchange for an honest review*

When Nicole Whitcomb’s car runs off a Colorado mountain road during a blinding snowstorm, she is saved from death by a handsome, fascinating, and enigmatic stranger.

Snowbound with him for days in his beautiful home high in the Rockies, she finds herself powerfully attracted to him. But there are things about him that mystify her, filling her with apprehension.

Who is Michael Tyler? Why does he live alone in such a secluded spot and guard his private life so carefully? What secret–or secrets–is he hiding?

Nicole has secrets of her own and a past she is running from–but Michael understands her better than anyone she has ever known. Soon, she is falling as deeply in love with him as he is with her–a profoundly meaningful experience that is destined to change their lives forever.

As the sexual tension between them builds, however, the clues mount up. When Nicole learns her host’s terrifying secret, there is nowhere for her to run but into the blizzard raging outside, and Michael may be the only one who can save her life.

I was really excited to get the chance to read this book by an author that I had not discovered yet.  While the first few pages started out strong, by the end of the book I was not as thrilled as others might have been.

I liked Michael and thought the tortured vampire would be able to be enough to keep my interest moving along at a great pace throughout the book.  Unfortunately, adding Nicole into the mix made it seem childish and naive with no sparks between the two for a romance.  I also couldn’t help but notice it was eerily parallel to another vampire book that is out in the market today.  I rolled my eyes at the point in the book when Michael told Nicole the truth of what he is.

With apparent difficulty, she opened her eyes again and whispered groggily:
“Say it.”
“Say what?” he asked gently.
“Say that you’re a vampire.”
–page 125

I just couldn’t get over all of the cliched dialogue and overdone speeches.  The ending was bittersweet and not one I was a fan of especially since it could be left open for further books that are at the moment, not on the author’s agenda.  I like happily ever afters in my romance books and at least hopes of future happiness.  I was disappointed that the author felt the need to torture the reader with the ending given to us after investing so much time in reading the book.  Not one I would read again.