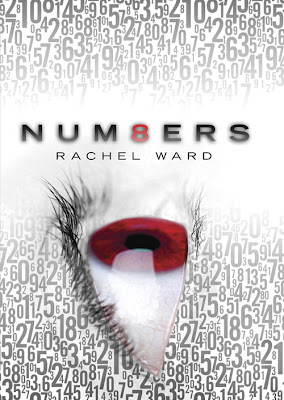 NUMBERS
Author: Rachel Ward
Source: Publisher
* I received this book free of charge in exchange for an honest review*

Ever since the day her mother died, Jem has known about the numbers. Numbers that pop into her head when she looks into someone’s eyes. They’re dates, the numbers. Dates predicting with brute accuracy each person’s death. Burdened by such horrible knowledge, Jem avoids relationships. Until she meets Spider, another outsider, and takes a chance. Maybe they can find happiness together, if only in the brief time that remains before his expiration date. But on a trip to London, Jem foresees a chilling chain of events: The city’s a target. The clock’s running out. The countdown is on to a blowup!

Jem’s mother died from a drug overdose when Jem was little.  After her death, Jem was forced to live in foster homes.  She has not only had a hard life, but she also has a hard time dealing with the fact that she can look at a person and see the date of their death in her mind.  Spider has also had a rough life, but he tries to be a little more upbeat about it.


When Jem and Spider are in London, she notices many of the people with the same date for death.  She knows something bad is going to happen and she begs Spider to leave with her.  What happens next is explosive.  The explosion occurs and many people die.  When the police are after Spider and Jem, they decide to go on the run and try to have a better life.


While I enjoyed the premise of the book, I couldn’t find myself enjoying the book.  Jem was always on guard, which I could understand, but she was so much on guard that she had no warm personality traits for me to cling to.  She was cold and distant and didn’t fit together with Spider.  Spider being the complete opposite emotionally, I found him to be the better character of the two.


The story started out strong and had me intrigued.  Then when the explosion occurs it starts to take off but fizzles out too quickly for my taste.  It did have some eerie moments that left me wondering, but not enough to keep me satisfied.