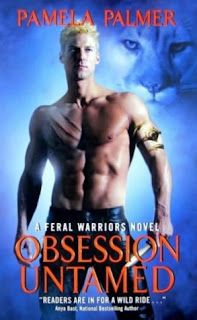 SUMMARY
(From Goodreads)
They are called Feral Warriors-an elite band of immortals who can change shape at will. Sworn to rid the world of evil, consumed by sorcery and seduction, their wild natures are primed for release . . .
Every time she closes her eyes, Delaney Randall suffers another nightmare. A brutal serial killer has found his way inside the tough, take-no-prisoners FBI agent’s head. Now she lives the murders through his eyes, from his deadly approach to his victims’ screams-until the night he breaks into her apartment and she fears she’s going to be the next to die.
But the man who snatches Delaney from her home isn’t the murderer. He’s Tighe, a dangerous Feral Warrior who needs her and her visions to stop the rampages of a creature as inhuman as he is evil. Tighe has little use for humans, but as he and Delaney join forces to track the dark fiend, he falls for the intense beauty and becomes wild with an obsession as untamed as his heart.
MY THOUGHTS

Obsession Untamed is the second book in the Feral Warriors Series by Pamela Palmer.  After an exciting first book, I was anxious to pick up where we left off.  I had a soft spot for Tighe after Desire Untamed since he seemed to be like a big brother to Kara.  He was sweet, but he was just as strong and vicious as Lyon when needed.

This book certainly took it up a notch — especially in the violence.  I will say that some scenes were graphic and might not be for all readers.  The kitchen scene in particular with the Clone and Delaney was pretty graphic in a sexual nature and might have some readers closing the book.  I on the other hand, decided to keep going and was surprised that it didn’t really bother me as much as I thought it would.  I didn’t think the author was going to address the scene in future scenes.  I wanted Delaney to deal with the bottled up emotions from the event, and eventually she does.  The reader just has to be patient for it.

I liked the side story of Paenther and Foxx as well.  While the rest of the warriors are working on tracking the clone and helping restore Tighe’s soul, Paenther and Foxx are out looking for the lost Feral Warrior Vhyper.  While they don’t find him in this book,  something does happen to set up the story for the next book in the series.

I also liked the friendship that evolved between Kara and Delaney.  I could see these two becoming best friends and leaning on each other when needed —  especially with all the testosterone in the Feral House.

If I had one major complaint it would be the repeated cat and mouse game between Tighe and the clone.  It became repetitive and dragged the story quite a bit.  Even with this complaint though, the characters and world that the author created has kept me interested in the whole series.  I have even started to become attached to one of the characters and can’t wait to see his book arrive.