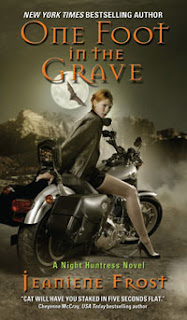 Half-vampire Cat Crawfield is now Special Agent Cat Crawfield, working for the government to rid the world of the rogue undead. She’s still using everything Bones, her sexy and dangerous ex, taught her, but when Cat is targeted for assassination, the only man who can help her is the vampire she left behind.

Being around him awakens all her emotions, from the adrenaline kick of slaying vamps side by side to the reckless passion that consumed them. But a price on her head—wanted: dead or half-alive—means her survival depends on teaming up with Bones. And no matter how hard she tries to keep things professional between them, she’ll find that desire lasts forever . . . and that Bones won’t let her get away again.

After serious issues with the ending in the first book, I am happy to say that the author has redeemed herself with this book.  I was not happy with the way Cat left in the final chapters of the book before this one, and I was hesitant on reading the rest of the series because of it.  I didn’t want to get my hopes up again in this book and then the author pull the rug out from under me at the end.  Good thing she didn’t or I might have screamed!


In this book, we flash forward four years into the future.  Cat has been working for Don at the FBI group that is not well known. She is basically doing the same thing she did with Bones, but she is now working with humans as her back up.  When Bones shows back up in her life, everything starts to go crazy in Cat’s life.  She is hurt, elated, scared and angry all at the same time.  The feelings are the same with Bones who feels that Cat deserted him instead of trusting him.


With kick ass fight scenes, witty writing and additional shockers to add to the story, this book surpassed my excitement from the last book.  The characters have grown and in turn have made relationships more concrete and lasting.  Friendships are developed, family is exposed and love scenes that will keep you flushed and hot all night long! (Go Chapter 32! RAWR!)


After reading One Foot in the Grave, it is safe to say I am officially hooked on this series.  I am intrigued and in love with the characters that captured my interest from book one and in this one!  I still have my favorites, and I still have my least appealing characters, but overall I am sucked into the world of fantasy and romance that this author writes so well!

I couldn’t help staring at him.  I might be immune to vampire powers, but Bones had always been my kryptonite.
–page 93

“You’re dating a vampire!  You just admitted it!”  Tate burst out.
I shrugged.  “You know the old saying.  Once you go dead, no one’s better in bed.”
“Christos,” Juan muttered.
“I hadn’t heard that one,” Don stonily replied.
–page 153

With deliberate slowness, Bones began unbuttoning his shirt. I watched…..

Oh just read all of Chapter 32 because I am not typing it all out! RAWR!