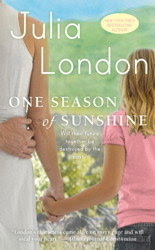 One Season of Sunshine
Author: Julia London
Source: Publisher
* I received this book free of charge in exchange for an honest review*

Should some questions be left unanswered?

Adopted as an infant, Jane Aaron longs to know the identity of her birth mother and why she gave her up. Her only clue is the name of the small Texas town where she was born, so she’s come to Cedar Springs for answers.
Handsome ad executive Asher Price lost his wife, the beautiful, mysterious Susanna, in a terrible car crash eighteen months ago. When he hires Jane as the nanny for his two children, sparks fly. Jane finds herself falling in love with both Asher and his children, but begins to suspect that Susanna was not the perfect mother and wife the family portrays her to have been.
As Jane gets closer and closer to finding out the truth about both her own and Susanna’s past, devastating secrets begin to emerge that may be more than anyone can bear. Will the truth bring Jane and Asher closer together or tear them apart forever?

This was my first book by this author, and I am sad to say that I wasn’t overly impressed with it.  To me the storyline was bland and so was the main character of Jane. I liked the character of Asher and his two children though.  Riley was the typical preteen know it all and Levi was the rambunctious 5 year old that left you out of breath just reading about him.  Asher was a Father who was left raising the these two children after his wife, who suffered from being bipolar, dies in a car accident. He is struggling with raising these two handfuls and also keeping his company from failing. He hires Jane to be the nanny when she moves to Cedar Springs to look for her birth mother that had given her up for adoption.

While I liked the plot and most of the characters, I wasn’t sold on the whole romance between the two.  To me it felt forced and there wasn’t any spark between them.  At times, the author was repetitive in the story and it made the book more drawn out than what it needed.  I feel if the author would have cut this book in half, it would have been better.  It was like the characters kept going in circles, and then at the end everything gets resolved rather quickly in the last chapter.

Overall, it wasn’t a bad book thanks to the supporting characters of the children.  I am still on the fence about reading more from this author.  It would really have to capture me from the first couple of pages with more speed and dialogue for me to really commit to another book.

2 Responses to “One Season of Sunshine by Julia London”