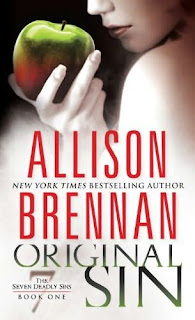 ORIGINAL SIN
Author: Allison Brennan
Source: Meryl L. Moss Media
*I received this book free of charge in exchange for an honest review*
SYNOPSIS:
Haunted by chilling memories of demonic possession and murder, Moira O’Donnell has spent seven years hunting down her mother, Fiona, whose command of black magic has granted her unprecedented control of the underworld. Now Moira’s global search has led her to a small California town that’s about to become hell on earth.

Tormented by his own terrifying past and driven by powers he can’t explain, ex-seminarian Rafe Cooper joins Moira’s dangerous quest. But Fiona is one devilish step ahead. Hungry for greater power, eternal youth, and stunning beauty, the sorceress is unleashing upon the mortal world the living incarnations of the Seven Deadly Sins.

Together with a demonologist, a tough female sheriff, and a pair of star-crossed teenagers, Moira and Rafe are humanity’s last chance to snatch salvation from the howling jaws of damnation.

MY THOUGHTS:
First of all, look at that cover!  I love the apple, the sideway look of suspense and the overall effect of it.  Just one look and you know it is going to be suspenseful and intense!
This is my first read from this author and it is the first in a series focusing on the seven deadly sins.  This book will leave you on the edge of your seat with all the suspense you can handle.  I was flipping pages so quick, I was finished with it within a couple of hours.  The heroine is strong and full of courage throughout the book.  The bad guys are bad.  The ending is awesome! I very intense read with climatic results!  It does have some dull spots in it, but the rest makes up for it!
MY RATING: