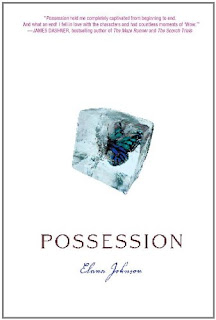 POSSESSION
Author: Elana Johnson
Source: Amazon Vine
*I received this book free of charge in exchange for an honest review*

Vi knows the Rule: Girls don’t walk with boys, and they never even think about kissing them. But no one makes Vi want to break the Rules more than Zenn…and since the Thinkers have chosen him as Vi’s future match, how much trouble can one kiss cause? The Thinkers may have brainwashed the rest of the population, but Vi is determined to think for herself.

But the Thinkers are unusually persuasive, and they’re set on convincing Vi to become one of them….starting by brainwashed Zenn. Vi can’t leave Zenn in the Thinkers’ hands, but she’s wary of joining the rebellion, especially since that means teaming up with Jag. Jag is egotistical, charismatic, and dangerous: everything Zenn’s not. Vi can’t quite trust Jag and can’t quite resist him, but she also can’t give up on Zenn.

This is a game of control or be controlled. And Vi has no choice but to play.

I wasn’t a fan of the characters.  How many more angry and angst filled heroines do we really need in a book? Fighting for what you want is one thing, but angry at everything is just overload for the reader.  I wished Vi would bring out her smile more often so we could see an emotion run through her besides anger.  I was also confused through much of the book.  It had me rereading more paragraphs than normal and made this book longer than what it needed to be.  It actually took about half of the book before I could get into a good reading pace for this story.  The set up for the world in which Vi lives in is also confusing due to the fact of not much of a history being told.  I wasn’t sure what their world involved and how it was established.  I just was left with that question mark above my head wondering why the beginning of the book couldn’t have explained things better for the reader.

I will admit to loving the ending.  It was one that left me excited for the next book in the series.  I just hope that the author can make the second book as great as the ending in the first.  This is one book that didn’t live up to the hype I had heard. I wanted more and didn’t get it until the end when it was too late. I also felt that too many things were left unanswered and that a few of them could have been wrapped up in this book to help satisfy the reader.