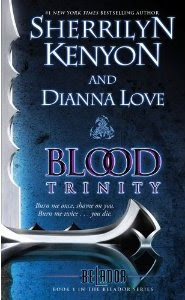 Supernatural warriors bound by an extraordinary code of honor face an ultimate test of loyalty in the exciting new paranormal thriller from New York Times bestselling authors Sherrilyn Kenyon and Dianna Love.
Atlanta has become the battlefield between human and demon. All her life, Evalle Kincaid has walked the line between the two. Her origins unknown, she’s on a quest to learn more about her past . . . and her future.
When a demon claims a young woman in a terrifying attack and there’s no one else to blame, Evalle comes under suspicion. Now she’s on a deadly quest for her own survival. Through the sordid underground of an alternate Atlanta where nothing is as it seems to the front lines of the city, where her former allies have joined forces to hunt her, Evalle must prove her innocence or pay the ultimate price.
But saving herself is the least of her problems if she doesn’t stop the coming apocalypse. The clock is ticking and Atlanta is about to catch fire. . . .
My book just arrived yesterday so I was unable to get my review posted in time.  Look for my posted review of this book later in the week!