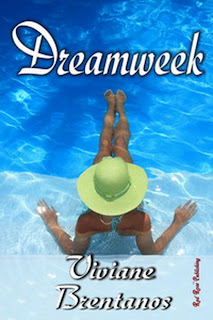 Title: Dreamweek
Genre: mainstream romance
Publisher: Red Rose Publishing
Release date: April 22 2010
heat: fairly hot
word count: 91,000
ISBN: 978-1-60435-683-0
SYNOPSIS:
Twenty-three-year-old Isabella Stevens is too young to be tired of life. Her job as a holiday representative for the prestigious Dream Villas located on the beautiful Greek island of Kuros has provided her nothing but grief. Demanding, unreasonable guests and a cantankerous boss pale in comparison to the problems she has with her love life. After 12 years as Paul’s childhood sweetheart, she’s learned the hard way he’s moved on.
Charismatic, handsome actor, David Wells is a man on top of the world. At least that’s what the casual observer would think. When he escapes his crumbling marriage on a Kuros vacation, he’s no idea what’s in store. A rocky first meeting does nothing to dissuade him from his attraction to the beautiful Izzie Stevens, a young woman with a mysterious air of pain in her eyes. For David, the emotional battle is equally daunting. Finally free of his wife’s hold on him, he is frightened by his new vulnerability and love for Izzie. But can David open the door to Izzie’s heart when tragedy shakes her world apart?
Authors Blog: Romance Ramblings