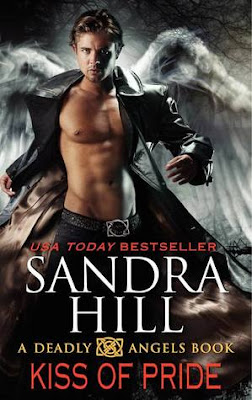 KISS OF PRIDE
Deadly Angels #1
Author: Sandra Hill
Publisher: HarperCollins/AVON
Release Date: April 24, 2012
SUMMARY:
SOME MEN ARE TOO BAD TO BE TRUE…
Is he really a Viking with a vampire’s bit? An angel with the body of a thunder god? A lone wolf with love on his mind? Alexandra Kelly, his prey, thinks Vikar Sigurdsson is either flat-out crazy or he’s trying to maneuver her into his bed–which is hardly where a professional reporter should conduct an interview, tempting as that prospect might be.
SOME MEN ARE TOO GOOD TO BE TRUE…
Until Vikar does something a teensy bit unexpected, and Alex begins to wonder whether her mystery man could really be everything he says he is: a Viking Vampire Angel on a thousand-year-long mission with his pack of sinful brothers—and a man who’s finally found the woman of his dreams. By then, Vikar is already wrapping his chiseled arms around Alex’s body…and sinking his wicked fangs right into her neck. If this is sin, why does it feel so good?
PURCHASE YOURS NOW
@Amazon
Author Website: http://www.sandrahill.net/KissOfPride.html