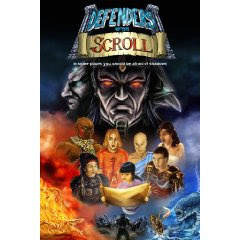 Today I have a Q&A feature with Shiraz who is the author of Defenders of the Scroll. He was nice enough to send an extra SIGNED copy to give away to one lucky reader of this blog! Details for the contest are at the end of this post!

Hi Shiraz and welcome to my blog, The Overstuffed Bookshelf. To start off can you tell the readers a little about yourself?

My day job is software design and development, mostly business, but I’ve designed a few games including a recent iPhone game called Drop Zone Elite. I’m very much an extrovert and ambitious. I hope to one day run my own game company by day while writing at night. I’m the kind of guy who thinks retirement means working at a more relaxed pace. I’m always on the go, and I really mean on the go. I’ve lived in 7 different cities in the last 6 years. Such is the life of a contractor. I’m travelling so much that I’ve minimized my belongings to the point where everything I own fits in to my car with room for a passenger.

I’m sarcastic and always joking around. I don’t like to take life too seriously because it certainly doesn’t take me seriously. If it did, one of those lottery tickets would have paid off. And apparently I’m glue. When I want people to get together, I’m usually the one organizing it. Some of my friends have said if I didn’t arrange things we’d never see each other. I’m not sure how it ended up being my job, but I’m stuck with it.
Can you tell us a little about your new or current releases?
Defenders of the Scroll is a Young Adult Fantasy about six teens from different times and places who are brought to a strange realm to protect a little girl and her magic scroll. Most of the teens are warriors, but the main character is Alex, an electric guitar player from our time who has a love of swords and sorcery movies, books, and games, as well as a taste for history. This book has been a long time coming. The concept was originally created to be a children’s animated series, by Rupinder Malhotra and Singh Khanna back in 2002/2003. When it didn’t get picked up, it was suggested that maybe it would do well as a book (and then afterwards become a series). So at the end of 2007 they asked me to take a shot at writing it. I’d written the Series Bible for the show, so I knew the characters intimately. I’d already seen them go on dozens of adventures in my mind. So, knocking out the book was like writing fan fiction.
When did you start writing? How did you decide what to write?

I started in grade 3. That was the first creative writing assignment I can remember getting, and we were asked to write a story using a line from Shakespeare. We were given ten lines to choose from and could use them as the title, theme, an line in the story, or however we chose. I used all ten as clues in a murder mystery. My teacher put a comment on my paper, “Are you the next Agatha Christie?”

I’ve written for fun since then. I never really decided what I wanted to write. Ideas just popped into my head and I had to write them down. Lots of short stories popped out, a couple screenplays, some poetry as well. I even have another novel in its first draft that I want to finish up soon. But this is the first piece I’ve published.
When you’re not writing what kind of books do you like to read? Do you have any favorite authors, that are must reads?
I love sci-fi and fantasy, but throw the occasional mystery/thriller in there. I grew up on Terry Brooks, Arthur C. Clarke, and a bunch of others. Now I’m into R.A. Salvatore, especially his stories involving Drizzt Do’Urden. George R.R. Martin’s Song of Fire and Ice series is amazing, and I, like most of his fans, wish he’d hurry up with the next book!
What are 3 things that are “must haves” for you when you sit down to write a new book?
Time, time, and time! I’m very busy! Actually, I guess I need my laptop too. Scratch one of those “time”s. Once I have those, I just let the story pour out. I’ve learned from experience that I have very little control as to what happens next.

What are Your favorite things to do in your downtime?

Downtime? Ha ha. Hmmmm, Facebook? I check my Facebook each night. I read a chapter of something before I go to sleep. When my schedule is only moderately busy, I like to go to the gym. If I’m in my hometown of Mississauga, I make time for video games with my cousin D. But most nights I’m busy on something from the time I get home from work until midnight. If I had real downtown, I’d find a beach by a warm ocean and do whatever you do on a beach and in an ocean. But eventually I’d get restless and have to go design a game, write a book, overthrown a small nation, you know. The truth is, those things really feel like downtime to me. Well, maybe not overthrowing the nation. Too much politics involved.

Where can we purchase your books?
You can get it worldwide at most online stores like Amazon, Barnes&Noble, Chapters.Indigo, etc. I’m currently working on getting it in physical stores. I’ll know about a few of them in the next month or so. I’m hoping to get it out for the Christmas season, but it’ll be tight. Wish me luck.
Do you have a blog or website that your readers can keep up with you and your books?
I set up a blog after getting this question: http://shiraztheauthor.blogspot.com/ The DotS website is under construction, but should be done soon. There’s also a Facebook fan page for DotS and I’m on Twitter (shiraztheauthor).

Now for the details of the contest. To enter to win, just become a follower and leave a comment with your name and email address, and post a link on your blog mentioning the contest! How easy is that? This contest will run until Friday evening (9/18/09) at 7pm. I will announce the winner by Saturday afternoon and you will have 24 hours to respond or I will have to pick a new winner! Good Luck!

4 Responses to “Q&A with author Shiraz and CONTEST!!!”