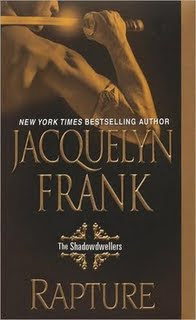 WOW! Yep, that about sums it up. I don’t know how else to say it. Just when I thought Jacquelyn Frank couldn’t do any better than what she has wrote in the past, she goes and out does herself again! I just got done reading RAPTURE and let me tell ya, I am already sitting on pins and needles for her next one!

This book is the second in her Shadowdwellers series. Ecstasy was the first in this series, and before that she did The Nightwalker Series. Out of the Nightwalker series, NOAH was my favorite and so far RAPTURE is right up there with it. I had to borrow this book from the library because in our small town I couldn’t get my hands on a copy of this book. It was sold out before I could get to the store. So I waited patiently and now I don’t want to give it up.

This is the tale of Magnus. He was betrayed in the previous book by his handmaiden, and in this book he rescues a slave and she becomes his new handmaiden. He tries to teach her the ways of the Shadowdwellers, but she teaches him the ways of trust and true love in return. Now, Ms. Frank had me panting, turning my fan on high and telling my hubby to meet me in the bedroom or else, and that was only half way through the book!! Let me tell ya, this is one sizzlin’ hot book that I did NOT want to put down. All I can say is please Jacquelyn, hurry and get the next one out in this series because I really want to see what happens next!!!

My grade for this book: A+

The Shadowdwellers live in a realm of darkness and sensuality, where order is prized and sin must be punished. Yet for Magnus, the head priest of Sanctuary, salvation rests with the one woman who will entice him into breaking his every rule…

SHE WAS HIS ULTIMATE TEMPTATION

Magnus is a man of contradictions—a spiritual leader in a deadly warrior’s body. Rules and order are for enforcing and visions must be followed—even if that means freeing a beautiful slave and making her his reluctant handmaiden. But she isn’t the only unenthusiastic partner. Betrayed once before, Magnus can barely bring himself to trust another woman.

Yet everything about Daenaira’s fiery innocence compels him time and again to cross every line he’s ever drawn for himself.

Daenaira grew up hearing tales of the fearsome priest named Magnus. But no one can convince her that men of honor truly exist. She soon learns that Magnus is very real—every inch of him—and so is the treachery that surrounds them. Beneath Sanctuary’s calm surface, an enemy is scheming to unleash havoc on the Shadowdwellers, unless Magnus trusts in a union ordained by fate, and sealed by unending bliss…

2 Responses to “Rapture by Jacquelyn Frank”