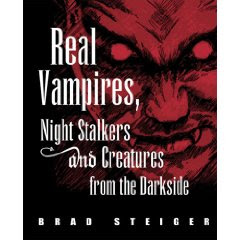 SYNOPSIS:
A chilling chronicle of the often ignored history of vampirism as it has surfaced repeatedly in news articles, historical accounts, and first person interviews, this shocking account of occultist rituals and the inhuman forces that influence them shines a light on the horrifying truth. Revealing that real vampires are not immortal, do not have fangs or sleep in coffins, and have no fear of sunlight or crucifixes, the examination dispels many myths but also confirms the truth behind several traits of real vampires, such as the insatiable thirst for blood and the dream of an eternal soul. Complete with 30 spine-tingling tales of the hideous wraiths and creatures that lurk in shadow, this fascinating collection includes the stories of the Mexican prostitute who mesmerized an entire village, convincing them she was an Incan goddess who required human sacrifice for her magic; the three teenagers who left a trail across the South as they conducted blood-drinking rituals with animals; and the mysterious Lady in Black who draws psychic energy from men who dare approach her as she wanders through city streets and parks.

This book was an interesting read, especially if this sort of genre interests you. It has a ton of great stories including the tale of Vlad the Impaler, Jack the Ripper and Jeffrey Dahmer to everyday people who have claimed to have encountered them. A dark and sinister read with great photos that are included with almost every story. I learned some things that were new to me and I also got a great history lesson in the process. It even includes a chronological timeline of Vampires in history. Great for even the collectors of the paranormal genre.

2 Responses to “REAL VAMPIRES,NIGHTSTALKERS, & CREATURES FROM THE DARKSIDE”