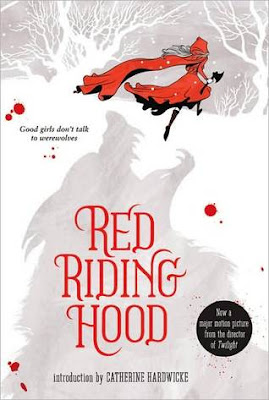 
The body of a young girl is discovered in a field of wheat. Her flesh mutilated by telltale claw marks. The Wolf has broken the peace.

When Valerie learns that her sister has been killed by the legendary creature, she finds herself at the center of a dark mystery, one that has plagued her village for generations. It is revealed that the werewolf lives among them, and everyone in the village immediately becomes a suspect. Could her secret love Peter be behind the attacks on her town? Is it her betrothed, Henry? Or someone even closer to her?

As the men in the village hunt for the beast, Valerie turns to her grandmother for help. She gives Valerie a handmade red riding cloak, and guides her through the web of lies and deception that has held her town together for so long. Will Valerie discover the werewolf’s identity before the town is ripped apart?

This is a dangerous new vision of a classic fairy tale, the happy ending could be hard to find.

From my understanding at the beginning, this is a tie-in book to a movie being released on March 11, 2011.  If I had paid any attention to this before reading it, I would have waited until I had watched the movie first.


The main reason I did not enjoy this book is there is no ending to it.  The reader has no idea of the ending until the release it online on March 14th,2011.  I was left unsatisfied and too many things left open. When I spend my time reading a book that I want to invest my time in, I want a conclusion or at least some tidiness of an ending to be in the book!  I don’t want to have to wait until a certain date just to download it. when I have lost interest in the book already.  Series books are one thing, open-ended stories where the ending are not available when the book should have them are annoying.


That being said, and pushed to the back burner for the review, the book still wasn’t as great as I was hoping for.  Yes, the pace is nicely set up, the story and characters are engaging at times, but again I fall back on the one hang up that ruined it.  Where is the ending?


The book was not remarkable enough to warrant the way the story ends and frankly, by the time the ending is released, I will have forgotten what the story was about.  If a book wants to leave you with this sort of ending, it really needs to stand out amongst all of the other books that are out right now.  If it doesn’t hold a candle to the better books on the market at the time, then it won’t have a chance in keeping a reader interested months later.


I was highly disappointed with this book and I am still a little upset that I invested so much time into the characters and story.  In short, this is a story better left to the movies if you are looking for a read to blow you away.