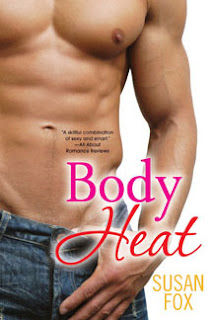 On the cusp of her thirtieth birthday, Maura Mahoney has yet to date a man who really excites her. Her quiet routine as a director at the retirement community Cherry Lane is disrupted by the arrival of Jesse Blue, a bad boy on a motorcycle who roars into her life. Jesse has agreed to avoid jail time by serving community service at Cherry Lane. Instantly attracted but wary of Jesse’s chickened past and youth, Maura puts him to work in the garden. Despite the growing sexual tension between them, there are many things keeping Maura and Jesse apart, chiefly their own assumptions about one another. But appearances can be deceiving and Maura and Jesse must overcome the expectations of those around them to find their happy ending…

Body Heat by Susan Fox was thisclose to being a Did Not Finish for me.  From chapter one, I couldn’t stand Maura.  She was stuck-up and had a holier-than-thou attitude. Every person she met, she formed an opinion of before even speaking to them.  Jesse was a little more tolerable, but I didn’t think there was much spark between the two characters.  Yes, there were sexy times, but the real connection between the two never clicked in my mind.

I also didn’t like how the author constantly had describe each person in so much detail that it was taken to the point of Maura comparing everyone to a celebrity name.  First there was the secretary who could be a Lucille Ball clone.  Then there was the lawyer who was a Richie Cunningham look-alike.  Then Jesse is described as a mix of Marlon Brando, James Dean and Russell Crowe. It got to the point where I would skim the descriptions and just find the celebrity name just to get to the next paragraph.

With too much dialogue, not much spark, and characters that graded on my nerves, I finally made it to the last page.  While I am not going to write this author completely off my list for future reads,  I can say that this one won’t be one I would read again.