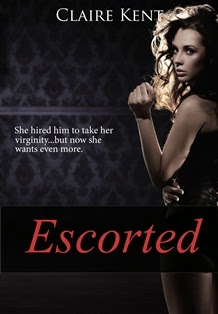 She hired him to take her virginity…but now she wants even more.

Lori might be a popular romance writer, but she’s never been anything but a flop with sex and love in her personal life. Still a virgin at twenty-six and increasingly frustrated by her inexperience, she decides to take matters into her own hands. She hires a talented, sexy male escort to take care of her inconvenient virginity.

She assumes one time with Ander will be enough, but she never dreams how much pleasure he can make her feel. Once isn’t nearly enough. Twice isn’t enough either. Soon, she becomes one of his regular clients.

Lori knows that nothing would be as foolish as falling in love with her paid escort, but she’s never been wise with her heart. And, despite his professionalism, he doesn’t seem entirely immune either.

When I first started reading this book, I honestly didn’t think I was going to make it to the last page.  There were plenty of moments that had me giggling, rolling my eyes and wanting to shake my head from some of the to-stupid-to-live moments of the characters.

Lori is in her late twenties, writes romance novels, and it still a virgin.  After her cousin refer’s her to Ander – a male escort/gigolo – she decides to hire him to take her virginity.  I am a sucker for this type of story.  Ander was patient, sexy, and very skilled in his profession.

While I enjoyed the book, there were many things that I didn’t like.  First of all, the sex in the beginning was way too clinical in my opinion.  Ander is always explaining things to Lori and describing every little detail for Lori.  If this woman is suppose to be a best selling author of romance — which her pen name is the actual author of the books name — she should be able to at least have some understanding of the act.  I mean Google can be your friend even in this area of description.  Another thing I didn’t like was some of the over the top dialogue with a repetitive theme.  Each time these characters had sex, it was the same phrases and mannerisms.

Now, with all that being said, this book still was pretty good.  If you can make it to at least the 25 percent mark of the story, then you will enjoy getting to the 100 percent mark.  Yes the ending is slightly corny and cliched, but it does give you a fun ride in between those two points.  A guilty pleasure book that will become addictive without you even realizing it.

Okay book, but it left me wanting more!
GOODREADS / AMAZON