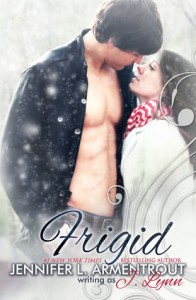 For twenty-one-year-old Sydney, being in love with Kyler isn’t anything new. They’d been best friends ever since he pushed her down on the playground and she made him eat a mud pie. Somewhere over the years, she fell for him and fell hard. The big problem with that? Kyler puts the ‘man’ in man-whore. He’s never stayed with a girl longer than a few nights, and with it being their last year in college, Syd doesn’t want to risk their friendship by declaring her love.

Kyler has always put Syd on a pedestal that was too high for him to reach. To him, she’s perfect and she’s everything. But the feelings he has for her, he’s always hidden away or focused on any other female. After all, Kyler will always be the poor boy from the wrong side of tracks, and Syd will always be the one girl he can never have.

But when they’re stranded together at a posh ski resort due to a massive Nor’easter, there’s nothing stopping their red-hot feelings for each other from coming to the surface. Can their friendship survive the attraction? Better yet, can they survive at all? Because as the snow falls, someone is stalking them, and this ski trip may be a life-changer in more ways than one.

I have had this book waiting to be read for at least a year now.  A friend had passed it on to me and it sounded like an okay read to me, but it kept getting pushed back in the pile. There are a few things that I didn’t enjoy about the book and I will admit that one or two things is superficial and in no way regarding the writing. For example, The Cover. Not a fan. It is too much focus on a barely there male chest.It is snowing and you happen you have your shirt wide open. Maybe that is to distract us from the fact that he is in desperate need of a haircut. So those are my superficial gripes about the book.

Lets talk the relationship between Kyler and Syd. We basically have a bad boy who thinks with his penis instead of his brain. Then we have the constant damsel in distress that can’t seem to do anything by herself. Oh and a previous boyfriend who happened to call her frigid in bed the one and only time she had sex is her favorite thing to go on about.

Overall, lets just say that I made it to the last page. Was it a struggle? Yes. Would I read it again or really recommend it to anyone? Probably not.