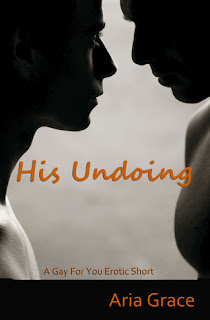 When Mike found out he would be sharing a dorm with a former football star, he was terrified. He’d been bullied by jocks all his life for being scrawny and weak and didn’t have high expectations of how it would go. To his surprise, Brett was a great guy that was easy to get along with and seemed to enjoy his company. When Mike learned that Brett was gay, it was a shock but it also explained the threatening letters that Mike had been receiving. Was Mike really at risk because of a jealous ex? Was there even anything to be jealous of?

His Undoing by Aria Grace is a short story in the M/M Romance genre.  It is told from Mike’s point of view.

Like other reviewers of this story,  I feel that only having the one point of view is what made this story not as great as it could have been.  I enjoyed reading from Mike’s POV but I this story would have made better sense and would have been better at the execution if we could have peeked into what Brett was feeling as well.

Mike is a guy who has always had a hard time talking to girls.  He is still a virgin, scrawny and tall, and not very muscular.  He is starting college and is dreading wondering who his roommate will be.  When he enters his new room, he meets Brett who happens to be a muscular jock.  He thinks he is going to be picked on by Brett and his friends, but they both become good friends.  Brett even introduces him to his game buddies, the cheerleaders and eventually fills Mike in that he is gay.

While Mike is trying to figure out who he really is — gay or straight like he has always though he was — he is attacked in the dorm.  This is the part that would have made having Brett’s point of view to give us a little more.  When it is revealed who the attacker was, it is a character pulled into the story from no where.  This is someone who is not mentioned throughout the story and we never even get a glimpse at this person. It made the suspense and buildup of the “who-done-it” quite a let down.

While the tender and sexy moments were written pretty well, this story really need to have Brett’s story told as well.