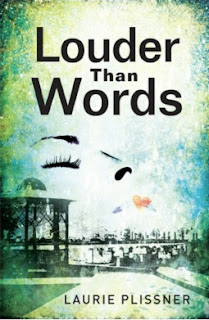 Since the snowy night when her family’s car slammed into a tree, killing her parents and little sister, Sasha has been unable to speak except through a computer with a robotic voice. Nothing is wrong with her body; that’s healed. But, after four years, Sasha’s memory, and her spirit, are still broken. Then one day, she’s silently cussing out the heavy book she dropped at the library when a gorgeous, dark-haired boy, the kind of boy who considers Sasha a freak or at least invisible, “answers” Sasha’s hidden thoughts — out loud. Yes, Ben can read minds; it’s no big deal. He’s part of a family with a host of unusual, almost-but-not-quite-supernatural talents. Through Ben’s love, Sasha makes greater progress than she has with a host of therapists and a prominent psychiatrist. With him to defend her, bullies keep the world from ever understanding Sasha, he pulls away. Determined to win him and prove her courage by facing her past, Sasha confronts her past — only to learn that her family’s death was no accident and that a similar fate may wait for her, in the unlikeliest of disguises.

Louder Than Words is the debut novel by author Laurie Plissner.

The summary of this book was what intrigued me instead of the cover.  While I can say the cover did absolutely nothing for me, the summary itself is what drew me into wanting to read it.  I loved the premise of this book — to the point to where I thought it was well outside the box of normal when it came to young adult paranormal.  The romance was a little on the darker side without the sweetness you would expect, but one that was different but good.  While I can’t say I was a fan of each of the characters, I can say that the author did have a great voice in her narration and execution of story.

It is kind of hard to describe how I felt upon reading the last page of this story.  It was good, but it wasn’t one that blew me away.  It had moments I enjoyed, but it also had moments that I didn’t.  While some parts I wanted to reread again and again, there were also parts I wanted to skim over to get to the next part of the story. There were several things going on at one time that led the reader down a different path than what you really wanted to read about.  At times it became too much and I wished the author would have just stuck with one or two things to keep me interested.

While this book is good for a debut author,  I feel it could have been better.  I think the book just needed a little more polishing before the ending was revealed.  Even though it wasn’t a favorite book of mine this year, it is an author I will keep an eye out for in the future for more.

If the library doesn’t have it, don’t worry about reading it!
GOODREADS / AMAZON