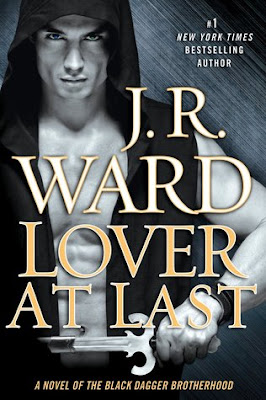 Qhuinn, son of no one, is used to being on his own. Disavowed from his bloodline, shunned by the aristocracy, he has finally found an identity as one of the most brutal fighters in the war against the Lessening Society. But his life is not complete. Even as the prospect of having a family of his own seems to be within reach, he is empty on the inside, his heart given to another….

Blay, after years of unrequited love, has moved on from his feelings for Qhuinn. And it’s about time: The male has found his perfect match in a Chosen female, and they are going to have a young—just as Qhuinn has always wanted for himself. It’s hard to see the new couple together, but building your life around a pipe dream is just a heartbreak waiting to happen. As he’s learned firsthand.

Fate seems to have taken these vampire soldiers in different directions… but as the battle over the race’s throne intensifies, and new players on the scene in Caldwell create mortal danger for the Brotherhood, Qhuinn finally learns the true definition of courage, and two hearts who are meant to be together… finally become one.

MAY CONTAIN SPOILERS!!!! You have been warned!

Lover At Last is the 11th book in the Black Dagger Brotherhood series by author J.R. Ward.  The main characters are Qhuinn and Blaylock with previous characters in the series make appearance’s.

Holy. Freaking. HECK!  I would have cursed with that last statement, but I think I used all of them up in the course of reading this novel.  Instead of a basic review like I usually do, I am going to mix it up and discuss the different story lines that are featured in this book.

I don’t even know where to start with these two characters.  After everything they have gone through, I knew we were still going to be dragged through the angst filled river before these two would hook up.  I laughed. I cried. I was frustrated with actions and words.  I was eager for the sexy times.  Qhuinn had some major sucking up to do (no pun intended) and can I say that this man can grovel. Blay even grew in this book for me.  His backbone and strength were in your face and I loved that he was so Alpha like in this book.  With that being said though, I still wanted to throttle Blay at times when he wouldn’t accept our emo Qhuinn and ‘get it on’ sooner!  Their sex was hot, but their ending to me was a little cheesy. I can’t decide if I am in love with that last line of the book or if I want to roll my eyes. I also keeping thinking about that lamp and the couch.

Even though there was no eye contact between them, Qhuinn felt compelled to say something.
“What’s…” He didn’t finish the “doing” part of the sentence.  Why bother?  The guy stalked past him like he wasn’t there.  “I’m great,” Qhuinn muttered as he resumed trudging through the ice pack. “Doin’ awesome, thanks for asking — oh, you having probs with Saxton?  Really?  How’d you like to go out and get a drink and talk about it? Yeah?  Perfect.  I’ll be your after-diner mint–“

“You are perfect the way you are.” Blay’s voice was strong. “There is nothing wrong with who and what you have always been.I’m proud of you. And I love you. Now… and always.”

The girl grew a spine people! I can honestly say that Layla has became a character I am thrilled to read about. Verily.
Before, I couldn’t stand her. Now she is one who deserves a happily ever after.  I really would love to see her with Xcor!  That car scene near the end of the book had me swooning.

“He was the father of my young, and he will be accorded all the rights and privileges of that station.”  “If any harm shall befall him, I will come after you, and find you where you sleep.  I do not care where you lay your head or who with, my vengeance shall rain upon you until you drown.”

I am begging and groveling that this male will be redeemed and get his HEA.  He is the bad guy that makes you feel so good.  Not only can he lead a bunch of bastards, but he can spout sweet words to his Chosen. Even if his book isn’t next –because it may be too soon for it — but I can still hope and pray it is soon. Plus I would love some more page time with Throe!

“You are in my dreams,” he murmured.  “Every day, you haunt me.  Your scent, your voice, your eyes…this mouth.”
“I cannae believe you let me touch you.”  His voice grew hoarse.  “I shall remember this for all my nights.”

Many people haven’t been a huge supporter of this story.  I can agree when it comes to Trez.  That Shadow is just plain boring and selfish.  But I will jump up and say that I am all for learning more about iAm.  When that man finally cracked and made his first joke, I laughed and instantly wanted to read more of him.  He is trying to guide Trez and protect him at the same time. Please Ms.Ward, bring me more of him!

I am in the opposite camp as most people on this one as well.  I wasn’t a huge fan of Rhev, so it is no surprise that I wasn’t a big fan of Assail.  Yes he has some sex appeal and there is chemistry between him and Sola, but I have only a slight interest in their story.  Plus, does anyone else think that Benloise is the one who kidnapped her? I think Benloise has a deeper story in this one.

I really hope that Ward will bring us a story for Saxton and give Lassiter one as well.  Saxton really grew on me with this book and he deserves a male of worth as well. There is also some pining for a young by Beth in this book — especially with it playing a HUGE role in Xcor’s revenge plans.  I also loved how the previous brothers were included in this book.  While I wish they could have been featured just a wee bit more, I understand that they had their time in previous books.  This just gives me an excuse to reread them again.

Z’s voice was a surprise.  And so was the Brother’s arm shooting up and shoving Rhage to the side.
“Will you get off me!”
“But I’m giving you CPR–“
“I will die before kissing you Hollywood.” Z tried to sit up, his breathing heavy. “Don’t even think about it.”