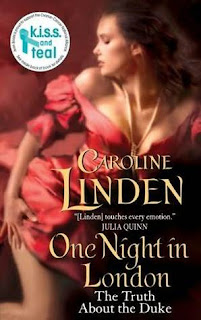 One Night in London
Series: The Truth About the Duke
Author: Caroline Linden
Historical Romance


A bargain that was all business . . . and pure passion.

Neither wealth nor beauty will help Lady Francesca Gordon win custody of her young niece Georgina, saving the girl from a cruel stepmother; she needs London’s top solicitor for that. But when Edward de Lacey, son of the powerful Duke of Durham, hires away the one man who can do the job, Francesca decides Edward himself must champion her case . . . if only she can melt the dashing lord’s stony heart.

Edward has reason to be guarded, though. London’s tabloids have just exposed a secret that could ruin his entire family. When Francesca offers a unique chance to undo the damage, Edward is forced to agree to a partnership . . . and now, each moment together feeds the flames of his scandalous longing for the passionate widow. But when Georgina disappears, fate will test them both . . . and leave their love hanging in the balance.

One Night In London is the first full novel in The Truth About the Duke series by author Caroline Linden.  There is a short novella that is considered book #0.5 as well titled I Love the Earl, but I decided to read the full novels first.  The main characters in this book are Edward de Lacey and Francesca Gordon.

Let me first state that I really enjoyed this book.  While there were a few things at the end that bothered me, overall this was a great start to a new to me series.

While Edward’s father the Duke is on his death bed,  he asks for forgiveness from his sons.  Apparently, before he wed Edwards mother, he had married another young woman.  He has kept this a secret for years and now he is revealing it with his last dying breath.  Edward, along with his brothers Charles and Gerard, must form a search for this woman to clear their name and fight for the title to remain with them.  As Charles is the oldest, he has the most to lose including the title of Duke.  Unfortunately, Charles is a bit of player and really doesn’t want to deal with the work involved of finding this possibly deceased woman.  Gerard is furious and worries about the scandal along with being considered a possible bastard.  He is intent on finding this woman, along with someone who might possibly blackmail them, and is seeing red.  Edward is the middle ground man.  He wants to resolve this, but he also knows that he must do it the smart and legal way. After he hires a lawyer to help get everything straightened out, he is confronted by Francesca Gordon.  Edward has just stolen her last chance at claiming her niece through the works of that said lawyer.  They strike up a bargain to help each other.

At first I got the same feeling about Edward that Francesca did.  I felt he was cold, emotionless and stiff.  But after he meets Francesca and begins the bargain, he really came out of his shell.  He was passionate, cared for his family, and had a soft spot that I wanted to explore.  Francesca was a ball of fire who could give as good as she got.  I loved whenever she would stick up to Edward.  I also enjoyed her way to bring out the laughter in Edward. The scene at the art gallery where they renamed famous artwork was funny and the key turning point to their relationship.

The ending was the only problem I really had with this book.  It seemed to wrap up too easily and kind of seemed like a cop out for the author.  The way the problem with her niece is resolved seemed too easy and something that could have been fixed from the beginning if the two would have just talked.  I was also surprised with the way Edward was so determined to figure out the truth of the Duke’s previous marriage and save the reputation of his family then seemed to give up and hand the problem over to his brother.  I can understand it, but it seemed out of character for Edward.

If you are looking for a complete finished story line, it isn’t wrapped up by the end of this book.  It is part of a series, so future books will explore it more.  The conflict and resolution of the romance though is satisfying enough though that I will continue in the journey of The Truth About the Duke.