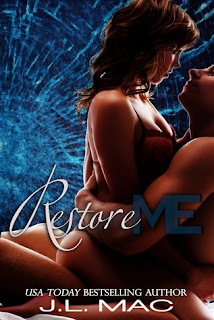 Navigating the world alone is all Josephine Geroux has ever known. Life altering tragedy struck early on for her. She endured an admirable struggle through her youth and learned the hard way how to adapt and survive. She managed to arrive at adulthood in one piece in spite of it all.

After such chaos, maintaining a life free of complications is a priority for her.
Everything changed when a man with amber eyes came through her door and claimed her heart. She fell hard in more ways than one. The pull between Jo and Damon seemed like fate bringing things full circle.

With another devastating loss looming, Jo fights to hold on to the very thing that brought her to her knees. She finds herself torn between a promising future and clinging to a devastating past.
But that’s not the most worrisome problem on her hands.

She must convince more than just herself to let the past stay in the past, where it belongs, but on her journey to find closure and resolution, she does the exact opposite. An old wound caused by a heinous act becomes exposed for what it is. The truth is catastrophic and Jo is helpless, watching as the ruins of her fragile world endure more turmoil.

Can something conceived from tragedy and malice end well? Can something so completely poisoned conquer adversity? Jo is left to make a decision; accept the circumstances she finds herself in or fight with unwavering ferocity to restore what has been damaged.

Restore Me is the second book in the Wrecked series by author J. L. Mac.

Talk about going from one end of the character personality spectrum to the other!  In the last book, I couldn’t stand Jo’s attitude and I thought Damon was a whipped puppy at times.  With this second book in the series, Damon became a cold man and Jo became the whiny and wimpy girl.  Granted, at times Jo was still bad mouth tough with a chip on her shoulder, but overall she was the one who did most of the begging in this book.

While the writing was much better in this one — with a better pace than the previous one — I still couldn’t connect with the characters.  I think it was mainly the fact that the characters were complete opposites of what they started out to be in the first book.  I will say that Grams might have been even better in this book and I think even though she is a side character, she is still my favorite.

The revelation at the end was kind of predictable only because this character is mentioned and brought into the story much more than in the previous book.  I also have a ‘feeling’ about another side character that could be a problem in the next book.

While I enjoyed this book better than the first one, I am still on the fence about this series as a whole.  I feel that the characters just didn’t ‘speak to me’ and it makes me hesitant on reading the next one.