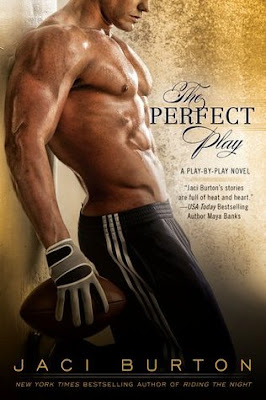 Football pro Mick Riley is an all-star, both on the field and in the bedroom. But a sexy, determinedly single mom just might be the one to throw him off his game…

For years Mick has been taking full advantage of the life available to a pro athlete: fame, fortune, and a different girl in every city. But when he meets and beds confident, beautiful event planner Tara Lincoln, he wants much more than the typical one-night stand. Too bad Tara’s not interested in getting to know football’s most notorious playboy any better.

As the single mother of a teenage son, the last thing Tara needs is the jet-set lifestyle of Mick Riley; even though their steamy and passionate one-night stand was unforgettable. Tara’s life is complicated enough without being thrust into the spotlight as Mick’s latest girl du jour. Tara played the game of love once and lost big, and she doesn’t intend to put herself out there again, especially with a heartbreaker like Mick.

But when Mick sets his mind to win, nothing will stop him. And he has the perfect play in mind.

Why have I waited so long to read this series? Maybe the hot cover side tracked me all this time because let’s face it, that cover is smoking hot!  I kept closing the book just so I could get another peek at that hot body.  I studied it long enough that I even noticed the sweat running down his chest!

I am not a big fan of sports in my romance, but author Jaci Burton really pulled it off in this one.  I didn’t feel too overwhelmed with statistics and sport plays in this one.  There was no shoving of the play book down my throat and the players actually seemed like real people.  I loved the character of Mick!  Hot, sexy and athletic all in one glorious package.  I could certainly see that cover model being Mick.  He seemed down to Earth without letting fame go to his head.  Tara was a little annoying at times with her constant reminders of being a single mother and having to give up so much to give her son a better life, but I shelved my feelings on that because the chemistry and attraction between the two made up for it.  Nathan, Tara’s teenage son, was actually portrayed as believable.  The side characters were also something I enjoyed reading about.  While I wasn’t a fan of Elizabeth, I can’t wait to see how her story will unfold with Mick’s brother Gavin.

While I felt the beginning of Mick and Tara’s romance was rushed and not that convincing, I did like how the relationship developed after their initial meetings.  Their relationship grew with real problems, emotions and turmoil.  I am really looking forward to reading about them again in future books.  A new series for me and one I will keep reading!