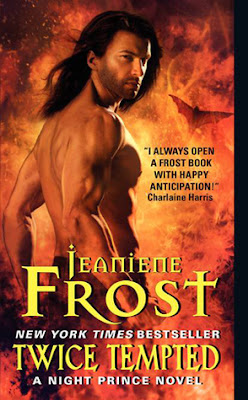 Dating the Prince of Darkness has its challenges…

Leila’s psychic abilities have been failing her, and now she isn’t sure what the future holds. If that weren’t enough, her lover, Vlad, has been acting distant. Though Leila is a mere mortal, she’s also a modern woman who refuses to accept the cold shoulder treatment forever–especially from the darkly handsome vampire who still won’t admit that he loves her.

Like choosing between eternal love and a loveless eternity…

Soon circumstances send Leila back to the carnival circuit, where tragedy strikes. And when she finds herself in the crosshairs of a killer who may be closer than she realizes, Leila must decide who to trust– the fiery vampire who arouses her passions like no other or the tortured knight who longs to be more than a friend? With danger stalking her every step of the way, all it takes is one wrong move to damn her for eternity.

Twice Tempted in the second book in the Night Prince series by Jeaniene Frost.

When this ARC copy arrived in my mailbox I screamed like a little girl.  My neighbors looked at me funny.  My dogs took cover thinking I was finally losing it.  My family even wondered if I had finally lost it.  Vlad, oh-sweet-lord-above-Vlad, how you love to mess with my heart.

Leila has finally had it with Vlad when we pick up shortly after the last book ended.  She decides that if Vlad can’t admit his feelings for her and express them with three little words, then obviously she isn’t worth enough to keep.  When he can’t give them to her, he lets her walk away from him. There is actually quite a bit that happens between the beginning and when she leaves, but I am not going to reveal too much so that it won’t spoil the book for you.  I will say that someone close to Vlad — and a previous character in the series — does stick around her and tries to keep her safe.  This person also tries to make her see that Vlad is not the one she should love.

When Leila returns home to the carnival, she doesn’t get to resume her previous life though.  Someone is hunting her and keeping one step ahead in the plot to kill her.  When the carnival is rigged with a bomb, Vlad is led to believe that Leila is dead at first.  A grieving Vlad is not a Vlad to mess with.  Although as scary as Vlad can be, Leila has a backbone that is just as strong. When she falls asleep, she is somehow connecting with Vlad.  At first she thinks it is a dream, but later on we find out it was real.  So thinking Vlad is just a dream, she lets her backbone stand at full attention with him.

His brows drew together like thunderclouds.  “Enough of this.  Tell me where you are.”
I almost said, “South Bend, Indiana” because what was the harm in telling Dream Vlad?  Then I paused. Why would I gratify Dream Vlad, either?
“I’m at the corner of None of Your Business and Screw You.”
–Leila with Vlad, page 95 in ARC copy

Needless to say, Vlad does finally catch up to Leila and he is not a happy camper folks.  He is ‘fuming’ — pun intended.  Even with Vlad angry though, Leila insists on pushing the subject of him not returning her love.
Vlad tries in his own words to explain his hesitation though.

“You see, you don’t want me to love you.  You want the version you’ve made up.  The knight, even though I’m the dragon and I always will be.”
–Vlad to Leila, page 169 in ARC copy

With Vlad walking away from her, Leila is determined to know everything about him so she can prove to love the real Vlad just as much.  Using her powers, she enters the Weapon’s Room that holds pieces of his past on display.  With each touch, she sees horrors of Vlad’s past.  With her powers being on the fritz though, she overloads her body and Vlad finds her just as she collapse’s. Before she passes out and goes into full arrest, she tells Vlad that she loves the real Vlad.

After she recovers, we are treated with Chapter 29.  Now let me point out that something MAJOR happens between Vlad and Leila, between her power surge collapse and this chapter.  After that major event, author Jeaniene Frost gives the readers something that is so gloriously good, that it will be rated up there with Chapter 32 in her Night Huntress series.  Loyal fans will know what I am referencing when I say Chapter 32.  While it may not out rank Chapter 32, Vlad and Leila’s Chapter 29 will tie pretty close with it.  All I can say is be prepared for scorching, sexy, and combustible!  Whew!

Again, after this hot chapter, many things happen.  The author doesn’t hold out when she comes out swinging with surprises and plot twists.  Some readers will cheer for some things, other things the readers will be shocked about.  All I can say is that Vlad will always be Vlad even in tender and quiet moments.  Just remember that he is feared for a reason, and the author makes sure to give very detailed imagery for you.  This book has a darker and bloody side, so be prepared.  While some things are resolved at the end of this book, there are still loose ends that will need to be addressed in the next book.  All I can say is bring it on Ms. Frost!

“This place stinks.”
“Did the guards forget to spray Febreze?”  Vlad asked in mock indignation.  Then he gave me a jaded look.  “It’s a dungeon, Leila.  They’re supposed to smell.”
Mission accomplished.  The stench might have actually killed my new appetite.  If Hell could fart, it would smell like this.
–Leila and Vlad, page 287 in ARC copy