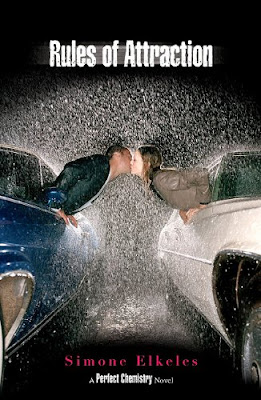 
When Carlos Fuentes returns to America after living in Mexico for a year, he doesn’t want any part of the life his older brother, Alex, has laid out for him at a high school in Colorado . Carlos likes living his life on the edge and wants to carve his own path—just like Alex did. Then he meets Kiara Westford. She doesn’t talk much and is completely intimidated by Carlos’ wild ways. As they get to know one another, Carlos assumes Kiara thinks she’s too good for him, and refuses to admit that she might be getting to him. But he soon realizes that being himself is exactly what Kiara needs right now.

After reading the first book in the series featuring Alex and Brittany, I quickly dove into the story featuring Carlos and Kiara.  If you remember from the first book, Carlos is Alex’s younger brother.  The book starts out with Carlos on his way back to America after leaving his Mom in Mexico.  He is suppose to come live with Alex because he has been getting in trouble and Mom is feeling afraid for him.


Right off the bat, you can see that Carlos has a big chip on his shoulders.  He resents his brother for leaving his family in Mexico and he makes Alex aware that he doesn’t intend to follow his rules. When Carlos is ordered by a judge to live with Alex’s professor, he his finds himself fighting his attraction to Kiara.  Of course, Kiara finds Carlos mysterious and sexy, but they both fight the chemistry that is brewing between them both.


I really liked this book.  Usually sequels do not live up to my expectations, but this one held its own rather nicely.  While I enjoyed the alternating point of views the author uses, I didn’t feel the instant attraction between Kiara and Carlos.  It felt rushed and forced at times.  I wanted the slow build of attraction like we read about with Alex and Brittany.  I understand that this was a different situation with different characters, but I wanted to see Carlos fall in love with Kiara at a reasonable pace.  I felt that they were both pushed into it.


Overall a wonderful book that leaves me anxiously awaiting the third book in the series that will feature the youngest brother Luis.  Forget the rules and bring on more attraction full of sexiness!