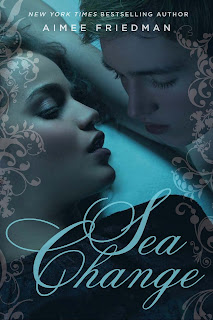 16-year-old Miranda Merchant is great at science…and not so great with boys. After major drama with her boyfriend and (now ex) best friend, she’s happy to spend the summer on small, mysterious Selkie Island, helping her mother sort out her late grandmother’s estate.

There, Miranda finds new friends and an island with a mysterious, mystical history, presenting her with facts her logical, scientific mind can’t make sense of. She also meets Leo, who challenges everything she thought she knew about boys, friendship…and reality.

Is Leo hiding something? Or is he something that she never could have imagined?

Where do I begin with this review for this book?  There were some things that I enjoyed, but there were other things that were just not that great.

First the good of the book.  Leo, was by far, my favorite person in the book.  He was sweet, cute, and caring, yet he was also mysterious and intriguing.  I loved everything about him in this book.  The mysterious folk lore and beliefs of the island were also captivating.  I wanted to learn more about the legends of Selkie Island and  the people that live there.  The writing was good and seemed to flow at a good pace, even if there were some problems to it near the end.

Which, now brings me to the things I didn’t enjoy about the book.  Miranda was suppose to be smart, yet she kind of flaked near the ending of the book.  Its like she lost her brain in the water and couldn’t find it.  Her mother does a complete turn around after one day and now enjoys everything about the island.  One minute she is loathing the island and its people, the next she is buddies with everyone again.  The characters of TJ and his father were just too creepy for my liking and the rest of the girls Miranda tries to fit in with are just as annoying.  I also hated the ending to the story.  It left too many unanswered questions without the reader getting closure to Leo’s mystery and the legends of the Island.  I can understand this if the author plans on a sequel to the book, but too many things were left unfinished to even make for a satisfied cliffhanger for the reader.